This past weekend was the last gun show before the ascension of the Obamassiah or, alternatively, the begin of the threatened civil war should McCain win the election.

I didn’t have a lot of time (which is why I wasn’t working the gun show), but wanted to at least give a look to see if there were any deals that I couldn’t pass up.

Well…I think I’ve mentioned before, that my wife had never fired a gun before meeting me. She’s gone to the range with me a couple of times, but she’s never really liked any of my handguns and just didn’t enjoy it all that much. We did the “gun range boogie” for a while and tried out different rental guns at the ranges around the area. The end result was that she declared the Glock 19 to be her favorite. 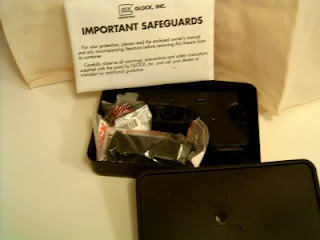 Since then, I’ve been keeping my eye open for a good deal on a used G19. Well…lo and behold at the gun show there was a vendor with two Police turn-in G19’s with night sights. They both had the expected holster wear but the muzzles were pristine, sharp, shiny rifling, smooth operation and triggers…well…they are Glocks so the triggers were…what you would expect.

I picked out the best of the two (which was a hard choice because they were almost identical in condition). My wife hadn’t come with me so I had to go home, get her and head back so she could look at it. She liked…we discussed…shopped around a little bit and then decided to take the plunge. We really can’t afford it right now, but it may be now or never….so whaddaya gonna do?

Anyway, the seller wouldn’t come down on the price any “I’m only making $30 on it as it is” he declared…but the lovely Mrs. Sailorcurt batted her eyes and smiled fetchingly which convinced him to at least throw in an extra magazine. 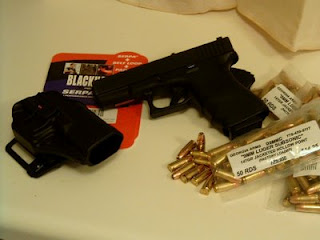 She filled out the paperwork Saturday, but it was too late to get the NICSNational Instant background Check System... More check run so we had to go back and pick it up after Church on Sunday…but she is now the proud new owner of a Glock 19.

We also bought a Blackhawk Serpa holster for her…due primarily to the rave reviews they got at the gun blogger/Todd Jarret/Para USA/Blackwater training exercise.

And some 9x19mm from Georgia arms for her to practice with. 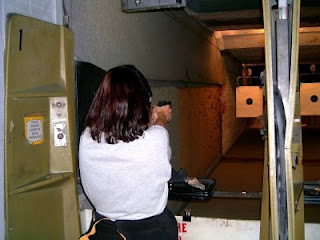 Quality time at the range with my beautiful wife: Priceless.

The Glock shot great, as expected. No problems whatsoever and seemed very accurate too. I only shot it once but I unloaded a magazine into the black from 7 yards at a pretty brisk pace. 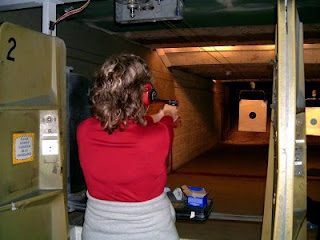 The Mrs. also has a friend who had just purchased a Taurus .357 revolver for personal protection. She had shot some when she was young but hadn’t fired anything in several years so she wanted some refresher training. The wife has shot a few times but is still a beginner too so, although neither are BRAND new shooters, I’d still say it was a new shooter range trip.

We went to Superior Pawn and Gun in Virginia Beach. I hadn’t been there in a long time but it was a convenient central location. I must say it is one of the better commercial indoor ranges in the Tidewater area. Not as nice as the Camp Allen weapons range where I’m a member, but that’s not truly a commercial range, since it’s limited to military members and retirees.

Superior even has a nice little area with a couple of tables where we could sit down and review safety, gun handling, grip techniques, sight picture etc, and they have a great selection of rental guns, even though we didn’t need any today.

Both ladies did quite well for not having much experience and I was absolutely thrilled to be able to help them out a little bit.

Here’s to hoping we can continue to freely enjoy these healthy and enjoyable sports well into the future.