In this edition, we’re going to reinstall the slide stop. 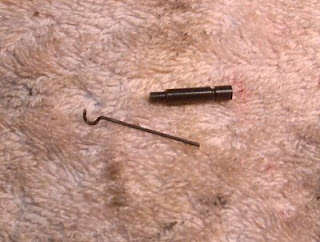 The trigger guard latch pin is also an integral part of the slide stop installation so it will be installed in this edition as well. 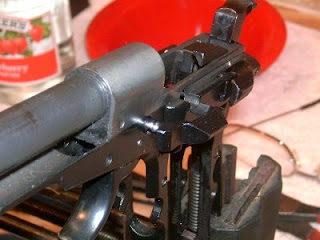 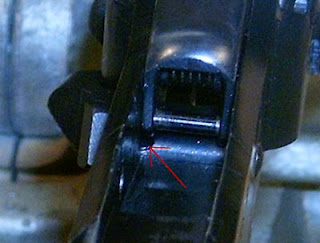 After the slide stop is fully seated, the hole will be basically right up against the edge of the frame. It is a little hard to see in the pictures so I used an arrow to point it out. 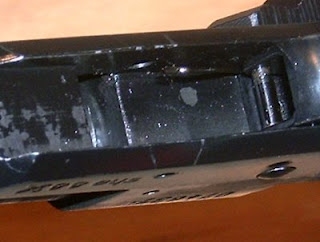 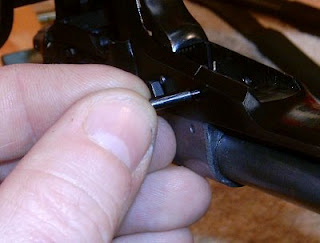 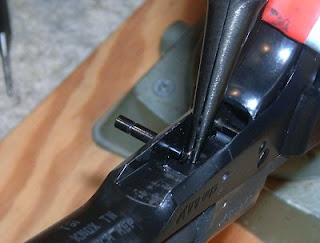 After the pin is started, use needle nose pliers, a dental pick or other instrument to push the slide stop spring up into the frame and out of the way of the trigger housing pin. Then push the pin the in until it contacts the other side of the frame.

As soon as the pin is in far enough to prevent the spring from popping down below it, you can release the spring. 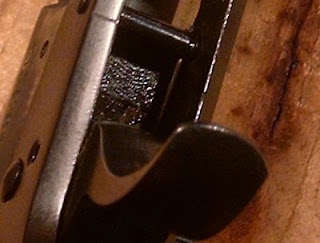 Then tap the trigger housing latch pin the rest of the way in. It should go in fairly easily until the right (smaller) part starts to go into the hole on the right side of the frame. At that point, it should require a tap or two to seat it.

After the pin is fully seated, the recessed ring around the pin should be visible toward the left side of the frame. The crooked end of the slide stop spring pops into that recessed ring to hold the spring in place and maintain spring tension on the slide stop.

Now the slide stop should held in place by the spring. You should be able to push it down easily, but it should pop back up under spring tension when released.