In B.O. Special, I introduced the newest addition to the gun cabinet and reviewed the rifle kit from Del-ton.
In Part 1, we talked about tools and preparation and installed the magazine catch.
In Part 2. we installed the trigger guard.

This time we’re going to install the bolt catch. This was probably the most difficult part of the whole thing…which isn’t really saying much because it wasn’t hard either. 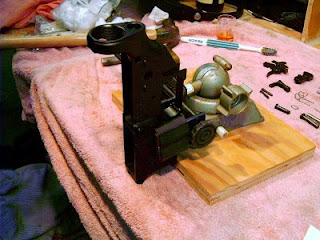 This is one of the times that I used my hobby vise.

I’m sure you could do this without the vise, but I can’t tell you how many times this has made a job that would have required three hands, a snap.

The vise’s gripping head is adjustable in all directions so it can be oriented pretty much however you need it. In this case, I turned and tilted it to hold the receiver on end with the rear of the receiver up. 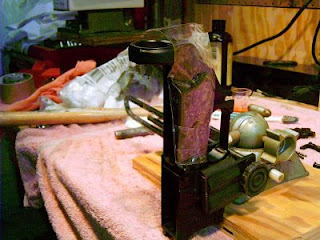 I used standard plastic packing tape to shield the receiver from scratches and marring. I used two layers just to make sure it was thick enough.

The mounting ears for the bolt catch are on the left side of the receiver just aft of the magazine well. 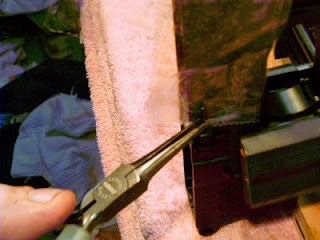 The roll pin that holds the catch in place needs to be started (unless you really DO have three hands). Needle nose pliers (or a roll pin holder if you have one) is used to align the pin with the hole in the catch mounting ears on the receiver.

I got it started by gently tapping with my brass mallet. Again…that whole “not enough hands” thing. There was no way to hold the pin straight with the pliers, hold a pin or roll pin punch and tap it with the mallet all at the same time.

Carefully tapping with the mallet worked to get it started. 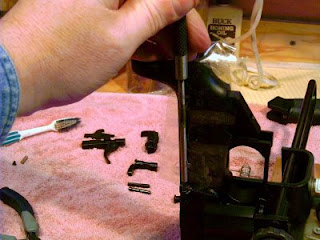 Then I used my long pin punch to seat the pin far enough to be firmly started. Don’t drive it in too far, you don’t want it to go all the way through the first ear and protrude into the area where the bolt catch still needs to be installed. 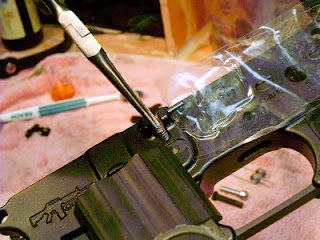 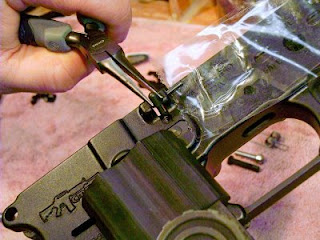 Then the bolt catch buffer goes on top of the spring. 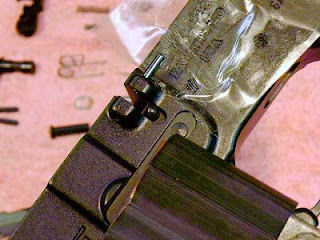 And now it’s ready for the bolt catch itself. 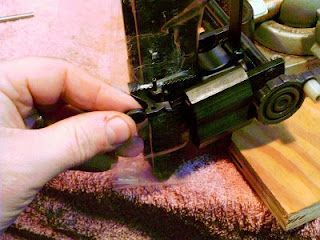 The bolt catch goes in with the release button sticking up above the top of the receiver. It should only go in one way so it’s pretty self explanatory. 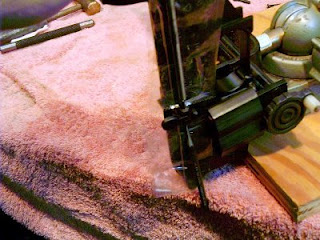 You’ll have to hold the catch in against spring tension while the pin is being driven the rest of the way in. Probably the easiest way to keep the holes aligned properly while the pin is being driven is to use a pin punch to hold it all together. You may notice that I put a little tape between the pin punch and receiver to protect the finish. Probably overkill, but I didn’t want to take any chances.

I pressed the pin punch against the edge of the work bench to keep it from falling out while driving the pin.

Them, as the roll pin is being driven in, it pushes the pin punch out of the hole. 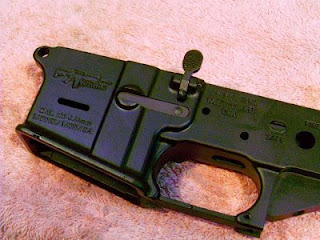 Again, if you mar the edges of the bolt catch mounting ears or the receiver, a little Aluminum Black will fix it right up.

Next up: installing the pivot pin.