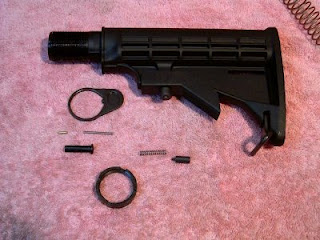 This part wasn’t explained well in the arfcom instructions so I had to find another thread on arfcom that covered installing the M4 buttstock. It wasn’t hard, but I wanted to be sure I was putting everything in the right way. 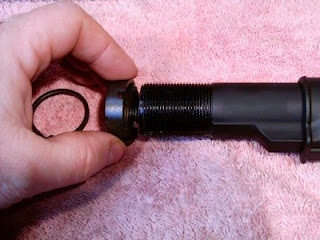 The first thing we’re going to do is put the locking ring onto the buttstock. The ring should be installed with the castellations facing aft toward the butt. 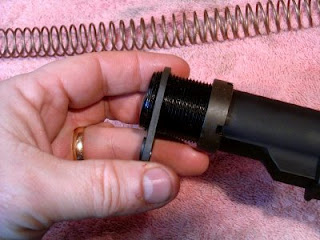 Then the backplate is installed. The backplate has a tab that fits in a groove in the threads of the buttstock tube that ensures it stays aligned. Also, there is a stamped “well” in the bottom part of the backplate. The protruding part of the well should be forward, towards the receiver. 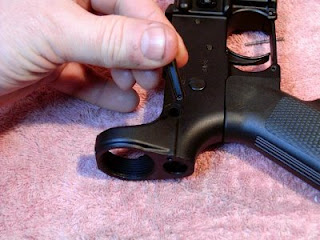 Next, insert the takedown pin into the hole in the receiver from the right side. It should be installed so that the groove in the body of the pin is facing aft. 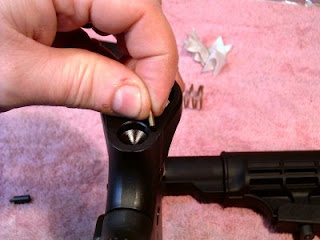 In the rear of the receiver, there is a small hole that the takedown pin detent goes into. 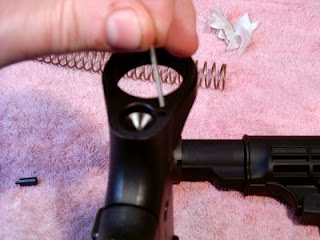 And then the detent spring goes in the same hole after the detent.

Sorry about the blurry photo. I’ve still got that same crappy camera I’ve been complaining about for years. As long as it works, I can’t justify the expense of buying a new one…the darn thing just won’t break.

I’ve thought I’ve killed it a couple of times, but taking the batteries out and putting them back in (the digital camera version of control-alt-delete?) brought it back to life each time. 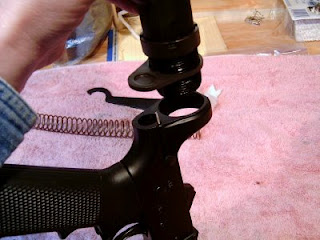 Now start screwing the buttstock tube into the rear of the receiver. Hold the receiver aft end up so that the detent spring and detent don’t fall out.

It just occurred to me that I’ve reverted to my Navy days and have started occasionally using the terms “aft” and “forward”. Versus going back and trying to find and correct all the times I’ve used those terms: “aft” means the back, the rear, the posterior aspect; forward means the front, the head, the anterior aspect. On a ship, aft is the blunt end and forward is the pointy end.

If I start using “port” and “starboard”, you have my permission to whack me in the back of the head. 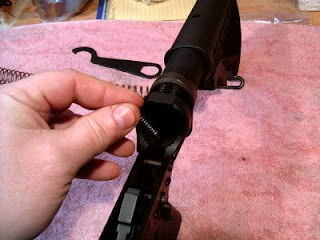 Anyway, only screw it in until just before the tube begins to cover the buffer retainer hole in the bottom of the rear part of the receiver.

Then drop the buffer retainer spring into the retainer hole. 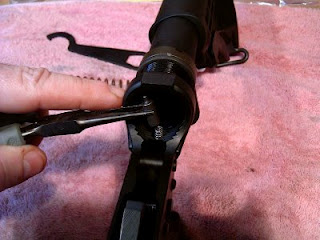 Put the buffer retainer over the spring. 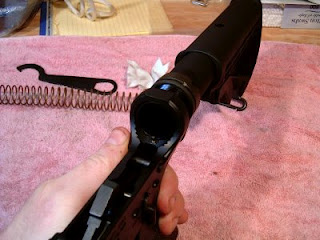 Then press the retainer down and screw the buttstock in a couple more turns. 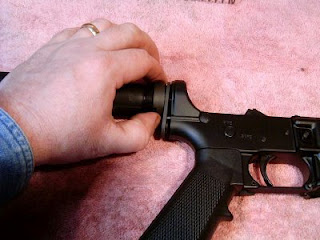 Next, push the backplate forward on the tube to seat it against the rear of the receiver. This will compress the takedown pin detent spring. As you first start compressing the spring would be a good time to rotate the takedown pin a little and be sure the detent is seated in the groove in the takedown pin body. 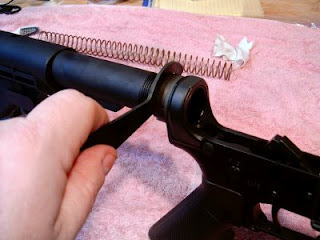 Screw the locking ring down by hand and then tighten it snug with a telescoping stock wrench, spanner wrench or whatever tool you can get to work.

It probably wouldn’t hurt to put some thread locking compound on the threads before tightening to help keep the locking ring from backing out. I didn’t (this time) but if I have trouble with it loosening up, I will. 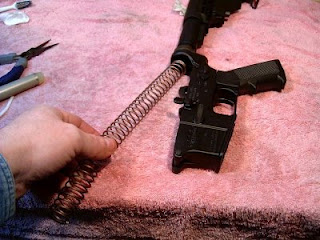 Next, insert the buffer spring into the buttstock tube. It is probably easier to do this with the hammer cocked, as that will get it more out of the way. 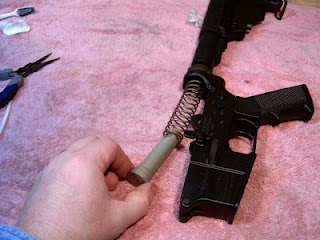 Then the buffer is installed with the shaft fitting inside the spring. Press down on the buffer retainer to get the front of the buffer into the tube. 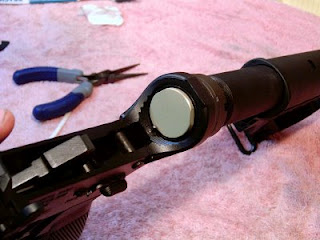 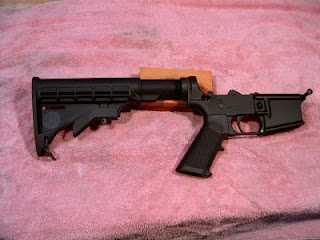 The lower is now complete.

Next time, we’ll install the assembled upper, take Barack to the range and finish up the series.