In B.O. Special, I introduced the newest addition to the gun cabinet and reviewed the rifle kit from Del-ton.

First of all, my guide for doing this build came from ar15.com and I want to give credit where due. I’ve never done more than fire and clean an AR-15 so I needed some guidance. Some of the pieces and parts were pretty easy to figure out, but some of the pins and springs are very similar so I wanted to make sure I did it right. Also, experience teaches the easier or more effective way of doing things. I’m not proud and if I can learn something through another’s experience, I’m all ears (or…in this case…eyes).

The main guide I used was here. It is very good and, other than one trick that I “invented” myself, was very easy to follow. If you don’t want to wade through the multitudes of pictures and my verbose instructions, I highly recommend that guide.

First, let’s talk about tools: The guide lists several, of which I only used a couple.

Roll Pin Punches: I used standard pin punches with no problems. I would think the roll pin punches would be handy if you were doing a bunch of builds, but for the hobbyist, probably not needed. I was going to buy roll pin punches, but couldn’t find them locally and didn’t feel like waiting to get them from Brownell’s or Midway USA. I would highly recommend having a long (6″) pin punch about 5/32″ in diameter for driving in the bolt catch pin. I have a full set of long pin punches that I got from Harbor Freight tools years ago for about $10.

Roll Pin Holders: I didn’t use these at all. Needle nose pliers worked fine for me. Again, probably useful if you do a lot of builds.

Hammer: I used the brass/plastic mallet which I inherited from my dad that you’ve seen in many of my gunsmithing posts.

#10 Flat-Blade screwdriver: Yup. Needed it for the pistol grip screw.

Pivot Pin installation tool: Absolutely not needed. This is where I “invented” a new trick. I used a .014″ automotive feeler gauge to install the pivot pin detent and it went in without a fuss.

Allen Key: Didn’t need this. My pistol grip screw was a straight-slot.

Telescoping stock wrench: I used a simple spanner wrench that I picked up at a gun show for about $5.

Tools not listed that I used:

Packing tape to protect the finish while installing the bolt catch pin.

A set of automotive feeler gages for installing the pivot pin detent.

Hobby vise. This has rubber jaws and was originally mounted with a suction cup. The rubber suction cup dry rotted over time (I’ve had it for over 20 years) so I mounted it to a piece of wood for stability. It comes in very handy in many situations and you’ve seen it before in my gunsmithing posts.

The next part of the instructions was the most vital and useful part. A diagram of all the parts laid out neatly and clearly labeled. I’m not going to steal their picture, but I will link to it. This, and the parts description that followed it, was very important to me because of the similarity of many of the pins and springs. It was priceless in ensuring that I installed the right parts in the right places. 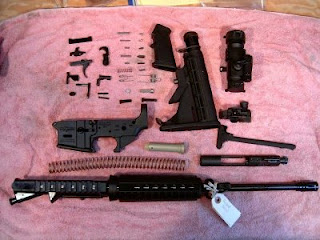 And here is my project. All the small parts are laid out in exactly the same manner as in the arfcom picture for ease of identification. 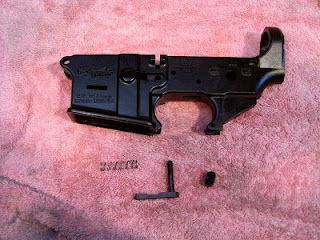 The first thing to install is the magazine catch assembly. 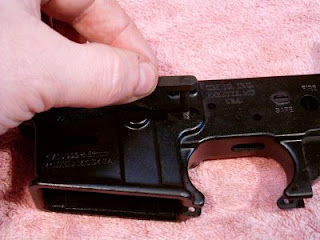 First, insert the magazine catch into the receiver from the left side. 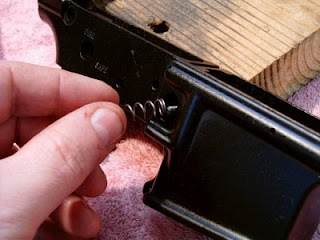 Then, from the right side of the receiver, install the magazine catch spring over the threaded post. 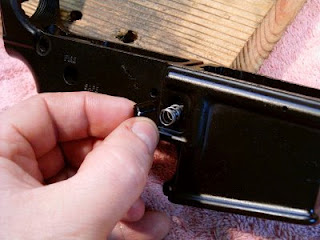 Then begin screwing the magazine catch button onto the threads on the post.

You won’t be able to go far before the receiver prevents you from screwing it further down. 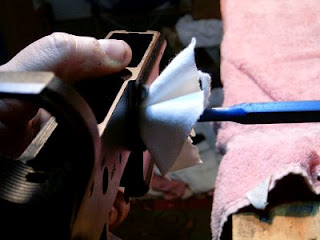 At that point, use a punch or some other object…I held the punch in my bench vise to make this easier and padded it with a scrap of cloth to prevent marring the button surface…to press in on the button. 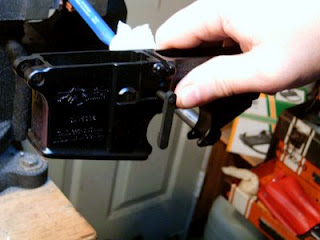 This pushes the magazine catch out away from the receiver so that you can spin it clockwise to complete the installation. 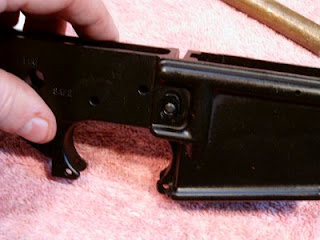 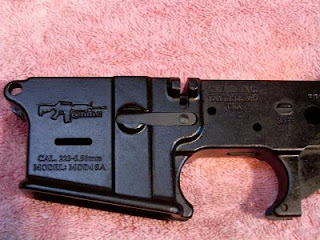 And the magazine catch should seat completely into the receiver when the button is not being pushed.

That’s it. Next time we’ll install the trigger guard assembly.