I’ve already mentioned that I bought a pair of stripped ARArmalite Rifle - The official designatio... More lowers shortly before the election. It was a win-win for me. I had wanted at least one ARArmalite Rifle - The official designatio... More pattern rifle for a while…not necessarily because I particularly like them, but because they are popular, very versatile and practical rifles; and, with the potential for a ban in the future, there’s no time like the present.

At the time, I didn’t have enough money to build both lowers up, but I decided I wanted at least one built before B.O. and the Dems in congress had any opportunity to ban them or the parts, so I bit the bullet (so to speak) and ordered a complete rifle kit from Del-ton.

Basically, it included a lower parts kit including a 4 position collapsible buttstock, and a complete upper. I ordered the upper with the 16″ lightweight chrome lined barrel with 1-9″ twist, M4 length handguards, standard front sights, A2 flash suppressor and an A-3 flattop upper receiver.

The whole kit and kaboodle with shipping ended up costing right around $545. Added to the lower that I had already bought for $125, two 30 round Magpul Pmags for $20 each and $30 for a rail mounted rear sight and I had a complete rifle for $740. I also added an optional Sight-Mark Aimpoint knock-off and a pro-mag cantilever mount which allows for co-witnessing the sights which added another $95. I still need to decide what style of sling I want and get that. 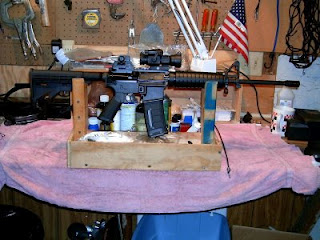 And without further ado:

This was before I got the promag mount so the red dot sight is actually too low to co-witness, but I wanted it on there for effect.

Say hello to the newest member of the family, Barack.

I’m already looking into what I want to do with the second lower. I definitely want to build the upper on that one as well as the lower and I’m thinking 6.8spc6.8mm Special Purpose Cartridge (Remingt... More. I’m hoping to start buying parts for it soon because I don’t want to wait too long in case some sort of ban gets rammed through and parts go even more through the roof than they already have. BTW…that one is going to be named Obama.

Over the next week or so, I’m going to document my build. I know that there are already a million sites out there with AR-15 build instructions…in fact, I got my instructions from two different threads on arfcom. I’m not doing this because I don’t think the instructions are out there; my intent is to share my journey through amateur gunsmithing with my readers and that’s what I’m going to do.

But first, a quick word about Del-Ton. They are VERY backed up. I ordered my upper in early November, just at the beginning of the rush. I received my order in late December. Mine was quick relative to the later orders, and many were delayed due to back-ordered components.

With that said, the people at Del-ton are doing an excellent job of keeping people informed of what’s going on and where they stand through their “Industry” forum at arfcom. 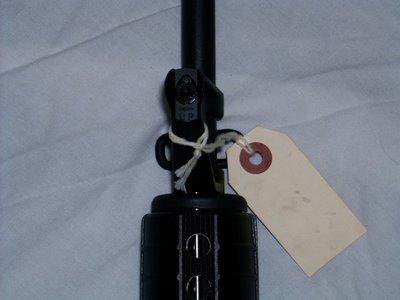 I have to report that I did have a problem with my order when I received it. The fsb was dramatically off-kilter.

After doing some research, I thought there was a good chance I could fix it, but I shouldn’t have to…I’d ordered a complete upper and I expected it to be ready to go out of the box.

I called the number and, after about ten tries, actually got through. I spoke to Laura who was very understanding and apologetic about it.

She assured me that UPS would be there to pick it up for return the next day.

Laura was at SHOT show the next week and asked if I could wait until she got back so that she could look at it before repairing it and returning it to me. I agreed to this delay…heck, I’d already been waiting two months…what’s another week. 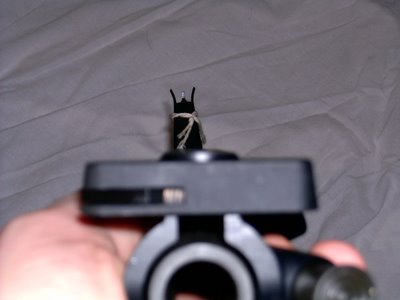 I called her after she got back and spoke to her. This was the only annoying part about the whole thing. She basically passed blame off. She said that they order those barrels with the front sights already installed, they don’t assemble them themselves. That’s why it was off.

In my humble opinion, when a company sends out a product with their name on the invoice, it is their responsibility. They should have recognized that the barrel was faulty when they installed it, not after shipping it to a customer and having to have it shipped back.

I realize that they have been extremely busy, but QA is vital in maintaining customer satisfaction.

I want to point out that this seems to have been a fluke. I’ve read and heard very good things about this company, and I was very impressed with their response to my problem. They handled it with alacrity and professionalism, so, the minor hiccup I had notwithstanding, I still feel comfortable in recommending Del-ton to others who are looking for a relatively inexpensive source of AR-15 upper receivers.

As far as the lower parts kit goes…it went together flawlessly…no problems at all. I will say that the first time I fired it after assembly, there was a little wierdness: I was ready to fire the very first magazine, put the selector to fire and squeezed the trigger for a very satisfying “Bang”. Released the trigger to reset and tried to pull again…nothing. It felt like the safety was on. I moved the selector to “safe” and then back to “fire” and successfully squeezed off another round, with the same result. After firing, it felt like the safety was on. I had to cycle the selector between “safe” and “fire” between every round for that first magazine.

During all this, I was adjusting the sights. I got the iron sights zeroed at 25 yards and finished burning through the first mag. I then tried the second mag and…lo and behold…no problems. I reloaded the first mag and tried it again…no problems. I’ve never been able to duplicate that problem since that very first magazine. Something in there must have not been seated completely correctly but subsequently popped into place because I’ve had no further trouble with it.

To finish the review. I wish the collapsible stock was a 6 position versus 4, but it seems well built and functional. The pistol grip is not incredibly comfortable for me so I’ll probably replace that at some point. The upper to lower receiver mating is pretty good, but just slightly loose, so I did install an accuwedge. The trigger is a little creepy and the pull weight is a little higher than I’d like. I’m going to have to clean that up some.

But overall, I’m very happy with it. You can’t expect perfection from a lower end product, but this is well worth the money in my humble opinion.