Google news alerts brought this silly article to my attention this morning:

PHILADELPHIA – An Internet advertisement seeking to trade an AK-47 assault style rifle for car rims has caused a stir in Philadelphia.

The ad appears on a popular Internet trading site.

Here’s the picture that accompanied the article: 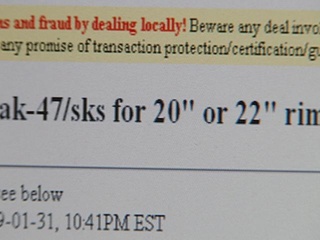 Now…knowing myself that the AK-47 and SKS are two completely different things, I would assume that the person offering the trade had one of each and was willing to negotiate for the rims.

But according to the article and accompanying video, the “AK-47 SKS” is some sort of newfangled design that I’ve never heard of before…and the owner of this apparent Frankengun agrees:

The gun owner said all he wanted was a set of wheels, and he’s willing to trade his AK-47 SKS rifle in return for those rims. He didn’t think it would cause a controversy, but he can understand why some folks might be upset about it.

Another clue that this may be a setup is the final paragraph of the story:

Only one person has contacted him about the “gun for rims” trade. He thinks the gun is worth $700 to $800, Schratwieser reported.

So…not only does this gun owner not know that the AK-47 and the SKS are two completely different things, but he also thinks that whatever it is that he has is worth about twice the going rate for an AK-47 and three to four times what an SKS goes for.

I’d say someone who lives closer (Sebastian, you out there?) should try to find out who this mystery seller is and do a little digging.

A gun owner who obviously knows nothing about guns runs an ad in Craigslist to trade this gun for an item typically associated with the demographic most commonly known for criminal abuse of guns…Hmmmm.

Anyone taking odds on whether this was just a publicity stunt by gun grabbers?