The other parts of the series: 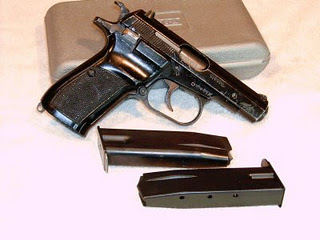 As promised, even though I’m not completely finished putting the CZ that I refinished back together and haven’t test fired it yet, I’m going to get started posting on my experiences with refinishing the CZ-82.

As always, click all pix to make bigger. As you can see in this picture, the CZ that I chose as my first victim is pretty beat up. I will say that it shoots very well and is extremely accurate. The only problems with it right now is that the trigger is a bit creepy, the ambidextrous mag release only works from the right side, and the finish and grips are pretty beat up.

As you can see, the mags don’t look too bad, but I’m going to refinish them anyway, just so they’ll match.

I chose parkerizing because I like the way the finish looks, it seems like something very doable for the hobby gunsmith at home, wouldn’t require a huge amount of equipment or materials that I don’t already have, and in researching the procedure, didn’t seem overly complicated.

Parkerizing is a process that uses either Zinc or Manganese phosphate to electrochemically convert the surface layer of ferrous metals into a corrosion resistant material. The Zinc Phosphating process was commonly used on military firearms during WWI and WWII but results in a slightly thinner finish and is considered slightly less corrosion resistant than Manganese Phosphating. Currently, Zinc Phosphating is more commonly used as an undercoating for other surface treatments like Duracoat. Zinc Phosphating typically results in a light grey surface and Manganese Phosphating in a dark gray to charcoal colored surface. The typical greenish tint seen in older military firearms results from the interaction between the Zinc Phosphate parkerized surface and the heavy cosmoline used to preserve the firearms while in storage.

In order to be most effective, Parkerized guns need to be protected with oil or grease. The Parkerized surface accepts and retains oil well which increases corrosion resistance even in harsh conditions, but a parkerized surface free of oil can still corrode.

There are some pretty simple recipes out there for a “from scratch” parkerizing solution, but I decided to go with something pre-made to better my chances of success. I also chose Manganese Phosphate both for the darker finish and for the thicker, more effective finish as I am not planning on using any other surface treatment (other than oil).

The first step in the process was to gather the materials and equipment that I would need. 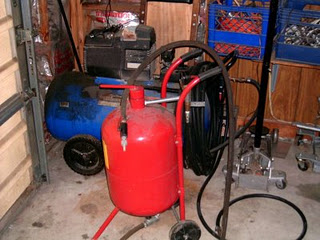 I already have a pressurized sandblaster that I got from Harbor Freight tools several years ago. I also have a 5hp, 30 gallon DeVilbiss air compressor that I’ve had for at least 15 years. I think I bought it at Sears if it matters.

If you don’t have a sandblaster, there are plenty of siphon style or gravity fed units that can be had for a reasonable price (~$30). If you anticipate using it very often, I’d recommend getting a pressurized unit as feeding of blasting material is much more reliable and consistent. I have a portable siphon style unit that I use from time to time, but I end up having to shake it every couple of seconds to get the media to feed. It can get very frustrating after a few minutes. 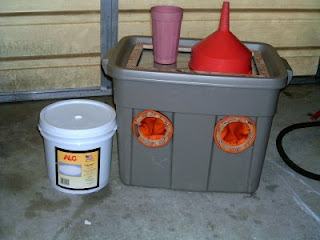 As I mentioned in a previous post, I already had some blasting media, but I was afraid that it was too coarse for what I needed. I decided to buy something that I knew would work rather than taking a chance on ruining the firearm with something inappropriate. I bought a 25lb bucket of “medium” glass beads from the local Northern Tool and Equipment. 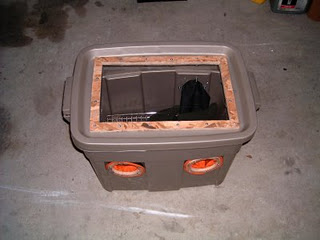 Glass beads being a bit more expensive than aluminum oxide or sand, I wanted to be able to maximize my use of it. In order to more effectively contain the beads for re-use and prevent them from becoming contaminated, I needed a blasting cabinet to work in. I decided I couldn’t afford a real one…besides the fact that my space is limited and I don’t have a place to put it if I bought one…I decided to make something that would work.

Basically, I made one out of a rubbermade tub, a piece of plexiglass, an old pair of rubber sandblasting gloves and some scrap wood I had lying around.

It served the purpose. I will say that the plexiglass fogged up from abrasion fairly quickly and made it a challenge to see what I was doing, and it didn’t completely contain the media and the dust…but it did a pretty good job and enabled me to do the whole job by re-using the initial 25 lbs of media several times. 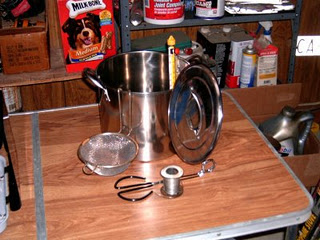 As far as the parkerizing process itself, the only things I really had to buy were a stainless steel pot (Big Lots, $8) and a candy thermometer (Walmart, $3). 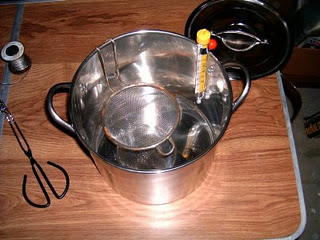 I bent the handle of the strainer to enable me to hang it from the lip of the stock pot into the solution. I also flattened the bottom of the mesh so that pins and small pieces wouldn’t roll toward the center. This worked extremely well for the small parts.

You’ll notice that the rim of the strainer is rusty. It obviously is not stainless, but the mesh is so it didn’t matter. The solution actually parkerized the rim while I was working but because I didn’t bother taking the rust off, it didn’t do a very good job. I may sandblast the rim before I do the next gun and get a good parked finish on it to preserve it for later. 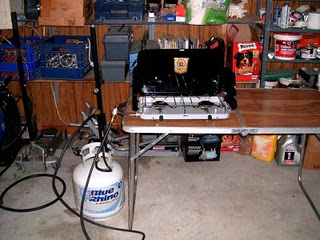 You’ll need something to heat the solution with. I just used my camping/hurricane survival setup (no, I didn’t have the tank that close to the stove while it was lit). 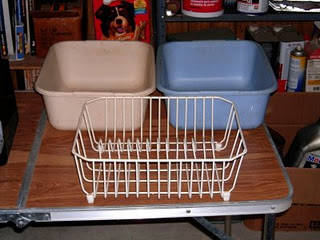 A couple of tubs for cleaning and rinsing and a dish drainer from my camping gear came in handy. 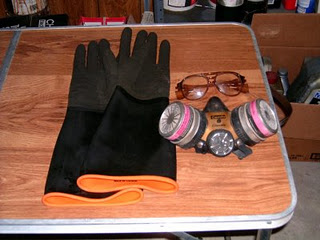 And, of course, we can’t forget safety gear. Rubber gloves, respirator and goggles. My safety glasses weren’t “chemical goggles”, but they did the job for me. YMMV.

I wore the respirator while using the parkerizing solution as well as when blasting. The warning label on the bottle said to avoid breathing the fumes. My filters are not made for chemicals and I could still smell the solution so I opened the garage door and turned on a fan to ensure plenty of ventilation. I’m going to get some charcoal activated chemical filters for my respirator before doing the next one. 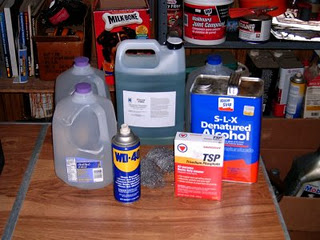 And, finally, the consumables. I used distilled water for the cleaning, rinsing and for cutting the parkerizing solution to prevent any minerals from compromising the process. Three gallons was enough. I used the denatured alcohol to clean the pistol parts before bead blasting. The TSP is Tri-Sodium Phosphate. It is a heavy duty degreaser/cleaner that is commonly used by painters. I got it at the corner hardware store so it’s pretty easy to come by. The parkerizing solution is Lauer Manganese Phosphate that I got from Midway USA. They recommend using their own “post parkerizing” solution, but I decided that WD-40 would probably work just as well. The steel wool pads are for “seasoning” the parkerizing solution before first use.

One thing I forgot to take a picture of is latex or nitrile gloves (non-powdered). I have a box of blue nitrile gloves that I bought from Harbor Freight a long time ago to keep from getting greasy when doing automotive work. I used them on this job to keep from contaminating the cleaned gun parts with skin oils during the parkerizing. That may have been overkill, but I didn’t want to take any chances on ruining the work.

That’s it. Other than the bead blasting equipment, nothing complicated or hard to come by. I already had most of what I needed and the stuff I didn’t was easy to find and relatively inexpensive.

If you don’t have the blasting equipment, it probably wouldn’t be cost effective to buy the setup just for this job. I wouldn’t imagine it would be ridiculously expensive to get the parts blasted by a pro. As an added benefit, the bead blasting was the most difficult part of the whole thing so getting that done by a pro would greatly simplify the whole process.

Next time, we’ll detail the parkerizing process from start to finish.