We were supposed to have a pin match today at the Airfield shooting club, but when the time came to start, we only had 5 shooters.

Someone said something about it being a big Judeo-Christian holiday weekend which I suppose may have had something to do with it. Also, the weather reports had been pretty ominous, although it wasn’t bad while we were there. Some people probably didn’t want to chance it. 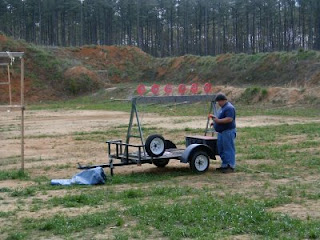 Whatever the reason, we decided not to go to the effort to set up for a pin match and just got out the steel plate rack to play around with.

We still had lots of fun (how could you not have fun at a shooting range on a Saturday morning?) 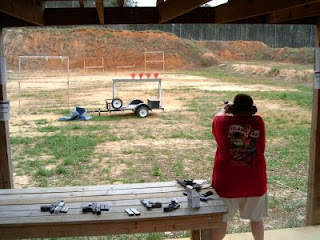 As I’ve not done much steel plate shooting, I didn’t really do all that well at first. I ran a couple of mags through the center fire guns I brought (the newly parkerized CZ shot just fine, by the way) and then just used the .22 pistol over and over and over and over….until I started seeing some improvement. 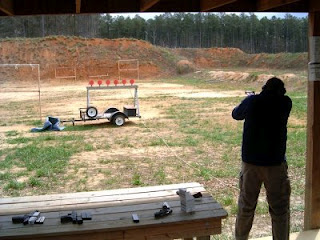 Actually, by the end of the day, I believe I had the fastest time. Six plates in 4.43 seconds. Someone recalled a 4.09, but I think they were mistaken…I remember a 5.09 being called out, but I never heard the timer call out anything quicker than my best time. 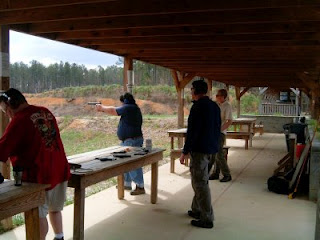 At any rate, it doesn’t really matter…we had a good time and I vastly improved from the beginning of the session to the end.

Can’t ever complain about that…even if I’d come out dead last. 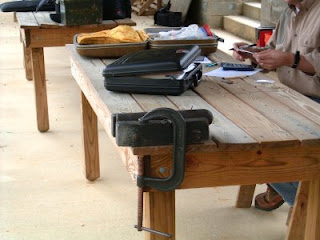 And then, to close out the day’s shooting, the club secretary popped off his noise-maker…a home-made black powder mini-canon. He made a point to show us that he was using a newspaper picture of Barack Obama as part of the wadding. Very appropriate if you ask me.

The maniacal laughter at the end of this short clip of the ceremonial firing was me. Some things are just too much fun.

The next pin match is on May 9th at 10am (the web site currently says 9am…it’s wrong…as I found out when I showed up at 9:00 this morning and was the first one there). To get participation up, they’re asking us to bring a friend. If any local readers are interested in attending, let me know and we can go together, or just meet there. I’m also going to try to get my son to go, but he’s getting very close to the end of his college course work so I don’t know what his schedule looks like.

I highly recommend it if you like to shoot. Even beginners are made to feel welcome. You’ll get some more practical experience with shooting under pressure and it’s a lot of fun. Come on out and give it a try.

Here’s more information on how the matches work and what to expect.