You know how I’m always complaining about my crappy camera?

I’ve wanted a digital SLR camera for the longest time, but I’ve never been able to afford one. I just couldn’t justify spending 600 or 700 dollars on a camera.

Well, I was in Wally World yesterday looking for a new belt. Just happened to walk by the camera section (I went to verify that the ammo shelves were empty as usual (they were) before looking for a belt; the electronics section is between sporting goods and men’s wear). While walking past, I noticed a red clearance tag on an SLR camera. They had it marked $299.99

Well, I knew it was going to be an older model but if it’s a decent one and the price is right, I’d be more than happy to have an older, outdated model. It’s a Canon EOS Rebel XT 350D 8MP. I didn’t know enough about this model so I wanted to check it out before deciding…the only problem is that they only had one left other than the display…which had obviously been on display for quite some time.

I went home and looked them up online. They got good reviews for picture quality and, although obviously not intended for professional photographers (which I most definitely am not), was deemed a very acceptable entry level SLR camera…albeit several years and at least three generations out-dated. It has a good range of manual settings, fast turn on and shutter response times, was capable of using the higher capacity compact flash media cards and would accept both the Canon EF and EF-S lenses. The only real complaints the reviewers had were that the menu was too hard to read in daylight, a couple of the settings that are only available through the menu should have independent external buttons and the viewfinder is small. Nothing that I would probably even notice and definitely nothing to prevent me from enjoying and being able to use it for my relatively limited purposes.

In checking current prices, te least expensive one I saw listed online was $409.99 and I believe that one was used. Most places that had them listed were asking over $500 and one had them listed for $849.99 (yikes…they were only about $900 when they were state of the art five years ago or so).

I decided that it was a good buy so I went back to make the purchase. Unfortunately, although they still had the display out there, the nice lady told me that they’d just sold the boxed camera that I’d looked at before. She told me that they did have another one on the inventory, but she couldn’t find it (I waited while she looked)…she told me she’d be working again after 4:00pm the next day (today) so to come back and she’d see if she could find the other one.

Well, I went back this afternoon and she was there. It turns out that the one left on the inventory was the display. Only the body was on display, the lens was still in the original packaging, but the body was a little dinged up from being handled. She told me that she was authorized to give a 25% discount for the display but that’s as far as she could go. I asked to speak with a manager because of the obvious wear on the body.

The manager said she could go to $200. I made sure the warranty still applied and accepted. Basically, I bought a $500 camera for $200, still under manufacturer’s warranty. I also paid the extra $20 for the extended service agreement, since it had been a display and was a little beat up.

I’ve just started playing with it, but so far it takes very good pictures. Much better than my old crappy point and shoot. A couple of samples (click ’em to make ’em big): 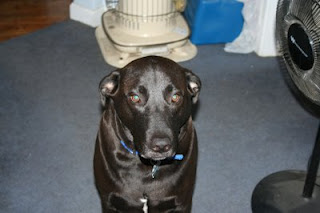 Granted, she doesn’t look much like a chihuahua, but she sure has the energy level of one.

Note the distinct lack of redeye even though I was using the flash. The clarity and color tone is MUCH better than my old camera. Maybe this isn’t that great compared to the up-to-date, higher dollar models, but it is a vast improvement over anything I’ve had since I stopped using my Yashica 35mm SLR several millennia ago.

I don’t know why she had her ears back. She looks like she’s afraid the camera was going to bite her.

I use my camera more for taking closeups of the gunsmithing stuff than anything else. I’m sure regular readers are very familiar with my out of focus, fuzzy, pixellated, off color closeups. 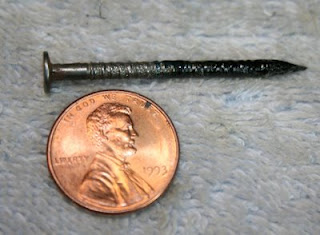 This is on my workbench using the normal lighting that I always use. It’s just a ring shank nail that I had used to puncture the seal on a sealant tube. The penny is for scale. 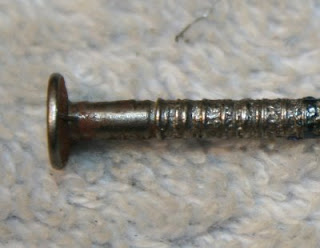 And here’s about as close a closeup as I can get (at least until I get the macro lens magnifiers that I ordered today…someday I’ll get a real macro lens, but until I can afford it, the magnifiers will have to do…).

I don’t know what anyone else thinks, but that looks pretty darn good to me.

I’m happy with my purchase. I think I got an excellent deal on a much higher quality camera than I would have otherwise been able to afford and than I’ve had for quite some time.

Hopefully you’ll notice a distinct improvement in the quality of my pictures in future posts.