After attending a very nice Church Service at the Oxnard Church of the Nazarene this morning, I did the obligatory sight seeing this afternoon.

I drove the Pacific Coast Highway back to LA, then tracked down Mulholland Drive and navigated it, stopping at the scenic overlooks along the way.

My excitement for the day came in the form of a shutdown on Mulholland Drive. They had a detour sign pointing the way down into Beverly Hills, but after leaving the drive…nothing to direct wayward travelers back onto the path.

The roads in Beverly Hills wind and wander through the hills and rocky slopes and many of them simply end when they ran out of flat space to put a road.

Luckily, I had my GPS with me so I could try to plot a route around the blockage. Unfortunately for me, there are lots of rich people in Beverly Hills. Several of the roads that show on the map as going through, effectively end at a forbidding gate with security warnings, video surveillance and intercom systems. This happened to me on three separate occasions. Apparently we little people have no need for the use of Hollywood mogul’s roads, even if they are listed as public roads on the map.

I basically spent about an hour and a half wandering around Beverly hills trying to find my way around the 1/2 mile section of Mulholland drive that was closed. Sigh.

I have to wonder what the guy washing his Red Ferarri in his driveway thought about me when he saw me go by in my crappy rental car, first in one direction…and then again a few minutes later going the other direction after coming up short against the unassailable entrance of some wealthy film magnate’s estate.

By the way…I’ve never seen so many Ferraris in one day in my life.

I took lots of pictures but the ones I took from inside the car didn’t come out very well as it was a bright day and there were lots of reflections from the glass. Upon looking at the pictures I took when I stopped and got out, I realize that I had something smudgy on the lens…CRAP. Now I’m going to have to do some photo-shopping before they’re post-worthy. I’ll get some up after I get home and have a chance to doctor them a little.

Anyway, as I was looking at the pictures on the memory card, I realized that I never posted a picture that I had intended to put up: 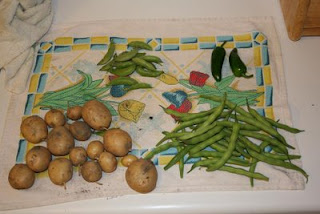 Behold…the firstfruits from my garden…picked the day before I left for California.

I cooked the potatos and green beans together with some store bought carrots (the carrots are still too small to slaughter yet too) and we had them for dinner Saturday evening before I left on Sunday.

The peppers are looking really good. Some are probably going to be ready while I’m away and will be a little over-ripe by the time I get home. Oh well…I’ll get over it.

1 thought on “Update from behind the tofu curtain.”