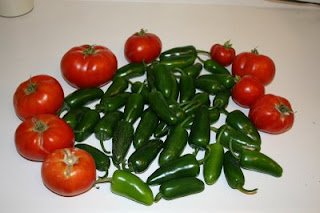 …It’s time to make some salsa.

Still lots of green tomatoes and baby peppers out there…and the pepper plants are still blooming so they’re going to produce at least one more crop.

Beans are blooming again too so I should have more beans soon.

I wish I had grown my own cilantro but I just didn’t think about it in time. Oh well…next year. Too bad the onions didn’t come up this year…I’ll have to buy them too.

I haven’t gardened in several years so I’ll have to get back into the swing of it over time. I made several mistakes that cost me crops this year that I’ll have to alleviate next year so I’ll have a better selection. Pretty much all I’m getting this year is tomatoes, peppers, potatoes, some cucumbers, a couple of ears of sweet corn, a few green beans and a few carrots. But it’s a start and anything is better than nothing.

As far as yield: I’ve already frozen a couple of pints of chopped peppers. Based on what I’m seeing right now, I’m guessing I’ll be able to can maybe ten pints of peppers and 5 quarts of tomatoes and still have enough to eat through the summer and make a few pints of salsa for immediate consumption and canning.

I haven’t completely lost my touch…just need some refining of my technique.

Oh…the potatoes we’ll eat. I don’t have a pressure cooker yet so I don’t have a way to can them. I intend to get one so I can can foods that require it, but haven’t gotten a round tuit yet.