Following in the footsteps of Fort Campell Kentucky and Fort Bliss Texas, leadership at Fort Drum New York are not only violating the Constitutional rights of their personnel, they are not only issuing illegal orders, they are apparently doing it in contradiction of their own base regulations. 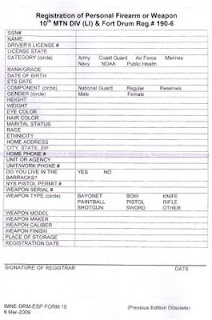 I have been informed by people (who shall remain nameless for obvious reasons) assigned to Fort Drum, that personnel are being asked if they own any firearms or other “dangerous weapons” (which includes BB guns and Paintball guns). If they answer in the affirmative, they are then handed the two page form depicted to the right and ORDERED to fill it out. They are told that it is irrelevant whether they live in private housing or on base, that all members attached to the installation must register their firearms.

A search for “Fort Drum Regulation 190-6” referenced on the form turned up this pdf document.

c. Individuals will be responsible for:
(1) Ensuring that all authorized privately owned weapons are properly stored and, if required by this regulation, properly registered in accordance with paragraph 6a of this regulation. Temporary storage is available at the Military Police Station, Building P-10715, pending assignment to a permanent unit and for temporary duty not to exceed 72 hrs. [emphasis added]

6. REGISTRATION CONTROL AND POSSESSION OF PRIVATELY OWNED SMALL ARMS, AMMUNITION, AND OTHER DANGEROUS WEAPONS.
a. Personnel residing in Fort Drum family housing will register all privately owned firearms in their possession within 72 hours subsequent to permanent unit assignment on the installation or into an on post housing area. Firearms in temporary storage at the Military Police Station must be removed within 72 hours of assignment to a permanent unit by the unit armorer and the weapon(s) owner. [emphasis added] 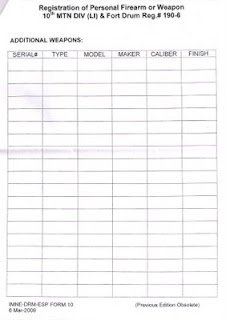 Additionally, the base web site, in its summary of regulations, reiterates this policy:

The Directorate of Emergency Services, however, seems a bit unclear on the policy. In this statement regarding personal firearms, carried on the website of the base newspaper (The Mountaineer) attributed to the DES, it is clearly stated that they expect all firearms to be registered:

After getting no responses to e-mails, I called the Directorate of Emergency Services and spoke with someone named Patrick. He refused to answer any questions directly and referred me to the Public Affairs Officer. I finally got in contact with the PAO, Julie. She informed me, in no uncertain terms, that base policy was to ONLY register the firearms of those personnel who reside in Army housing. She assured me that she was very familiar with this issue as it had come up before and she is a gun owner herself; that the base policy as I was reading it is correct: personnel residing in private housing are not required to register their long guns on base, they only need comply with New York State Law.

Being that this directly contradicted the policy acknowledged by the Directorate of Emergency Services in their notice in the Mountaineer, I felt that I needed clarification directly from the DES themselves. I called back to the DES and spoke to Patrick again.

He again refused to answer my questions, but he let slip a couple of clear indicators. He asked the date of the copy of regulation 190-6 that I had available. When I replied that it is dated 1999, he immediately told me that that regulation is out of date. He said that the regulation had been revised around the 2005-2007 time frame. He said he did not know whether the updated instruction was online or not, or how I could get a copy. He also expressed great surprise that the PAO had answered the question the way she had. He clearly implied that he thought that she was wrong, but wouldn’t say so directly.

He told me that the only person authorized to speak with me was the Director himself, who wasn’t available that day (last Friday) and requested that I call back on Monday. Well, I was busy with my real job and didn’t get a chance to call on Monday, in fact, it wasn’t until Wednesday that I called back, but when I did, I was told that the Director was out of the office, they took my name, number and the subject of my call (I just told them it was regarding the base policy on registration of firearms), and was assured that he would call me back.

It’s now Friday and I’ve heard nothing. I think it’s probably safe to assume that they don’t want to talk with me about this. I’ve tried a couple of different avenues to get a copy of the updated regulation, but have had no success. I will keep tying and, if worse comes to worst, I’ll file a Freedom of Information Act Request. When and if I get a new copy of the regulation, I’ll update this post…but, in the meantime, I must assume that what I found on their own base web site is current and up to date.

Whether the regulation has been changed or not, AT BEST, the leadership at Fort Drum is issuing illegal orders and blatantly violating the Constitutional Rights of the very people who’ve sworn their lives and their sacred honor to defending those rights and that Constitution.

And, at worst, they are disregarding and disobeying their OWN BASE REGULATIONS in doing so.

We cannot let this stand. Bloggers, please spread the word about this and everyone, please contact your Senators and Representatives and urge them to demand that these leaders support and obey the Constitution that they’ve sworn to protect and defend.