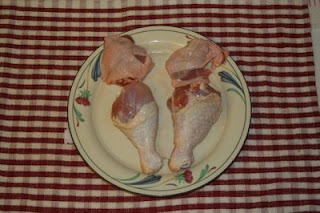 These pieces of chicken are the same brand, bought from the same store on the same day:

Those must have been some funny looking chickens…big, giant legs with little bitty thighs…either they were distantly related to Popeye or they were imported from Chernobyl.

They tasted just fine though after grilling and liberal application of BBQ sauce. (BTW: We had mashed potatoes and green beans from the garden to go with them…yum).

1 thought on “Notes from the Dinner Table”