Apparently, I was wrong.

“A man at a pro-health care reform rally…wore a semiautomatic assault rifle on his shoulder and a pistol on his hip….there are questions about whether this has racial overtones….white people showing up with guns.”

Of course, they conveniently edited the video so as to hide the fact that the bearer of the utility rifle was actually Black.

So, they haven’t stopped the hysterical race-baiting…as usual for the Anti-Gun Lobby (of which MSNBC is an integral part), when the facts don’t fit the narrative – just lie about it. 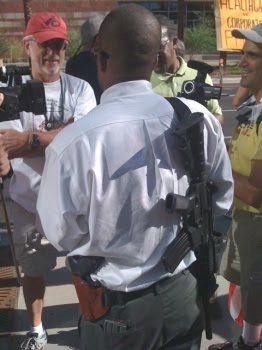 …how the hysterical rants that carrying a firearm openly outside of an Obama rally was a blatant demonstration of racism seemed to have strangely died down when the person toting a firearm was this guy?

Photo courtesy of the Arizona Republic, via Artful Articulations.

1 thought on “Anyone else notice…”

We use cookies on our website to give you the most relevant experience by remembering your preferences and repeat visits. By clicking “Accept”, you consent to the use of ALL the cookies.
Do not sell my personal information.
Cookie settingsACCEPT
Manage consent