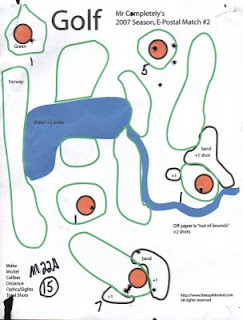 Lessons learned and my perspective from the e-postal match.

First, I learned that you don’t have to be able to see the red dots to hit them…you’ve only gotta know about where on the paper they are.

As I’ve mentioned before, I shoot as much for improving my skills with my self defense weapons as for enjoyment. For that reason, even my range only guns I like to shoot in as close to the configuration of my carry guns as possible. I do have optics on a couple of my rifles, but I try to use iron sights as much as possible. You can’t always count on your optics to be there or be working.

With that in mind, I tend to shoot with iron sights most of the time.

As I’ve gotten older, my near vision has deteriorated to the point where I have trouble focusing on the front sight. I can see it well enough to hit center mass shots all day long, but for the fine aim needed for this type of precise shooting (the red dots are slightly less than 3/4 of an inch across), I have to use reading glasses in order to focus clearly on the front sight. The problem with that is that it kills my distant vision and all I can see of the target is a vague blur. 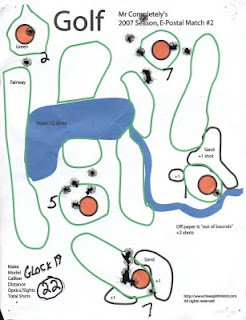 It doesn’t matter. As this match attests, all you really need to be able to see clearly is the front sight. If you have any inkling whatsoever of where the target is, you can hit it.

Now, obviously, not all my shots were right on the red dot…but I was EXTREMELY happy with the groups that I made. Especially with my primary carry gun, the 1911.

The targets to the right are posted in the order that I shot them…click to make bigger.

I only shot one target per gun…this was not the result of shooting the match over and over and using the best target. These represent my first and only attempt with each firearm.

With each target, I started at the bottom and worked my way up.

I started out with the .22 because it is accurate and has low recoil. I expected to do fairly well with it and I thought it would be a confidence booster. I wasn’t wrong, even though I started out a little rocky, getting two in the sand and one barely on the bottom of the page. I quickly settled down and started getting first shot hits. I had a little bit of a rough patch with the upper right hole, and the low one on that hole was a called flyer…but even with it, the group was still only about an inch and a half at it’s largest point. 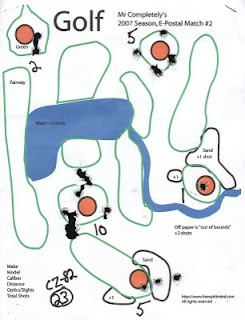 The Glock is my wife’s gun and I actually don’t like the feel of the Glock trigger at all. I never have…but I do seem to shoot them OK. I was trying very hard not to overcorrect for misses, which led to several misses in the same general area. By the time I got to the top right I was being more aggressive with the corrections, which made for a much larger group. Even so, the largest group is 2 inches and I had a five shot group and a 6 shot group of an inch and a half and an inch and a quarter respectively. Not bad at all for a gun that I rarely shoot and don’t really even like.

I was very disappointed with my score with the CZ-82, but not with my shooting. The worst hole was the one that I took ten shots to hit. I put a ten shot group in about two and a quarter inches with six of those ten in one big ragged hole.

The other two rough scoring holes put a five shot and a three shot group both into about an inch and a quarter.

Next was my primary carry gun. A Rock Island Armory “tactical” model 1911. One problem I’ve had with this gun since I bought it was that it was shooting low. The first few times I shot it, it was making good groups, but about 6 inches low at 21 feet. 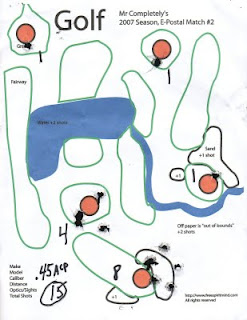 Everyone I talked to about it kept telling me that it’s gotta be me. I must be limp wristing, flinching or otherwise pulling them low. Well, I wasn’t buying it. I’ve been shooting 1911’s for over 20 years. I shoot them with the Navy Marksmanship team. I own another .45acpAutomatic Colt Pistol - Denotes one of s... More (a Ruger P97) that I’ve owned for years, is lighter than the 1911 and has more recoil. I don’t shoot it low. I don’t shoot any of my other guns low. Why would I be pulling this one that badly?

Well, I can officially say that I’ve now resolved the issue. The last time I took it to the range it was still shooting about an inch and a half low. I took a few more swipes with the file on the front sight and now she’s right on the money…and my shooting on this match proves it. I was putting the barely visible fuzzy red dot right at the top of the front sight and VIOLA! He shoots, he scores!

The first hole on this one was the worst. After shooting several rounds, I realized I wasn’t practicing proper breath control. Once I started concentrating on my breathing, it settled right in and I started getting good hits. The first two holes produced five shot and four shot groups respectively, both in one and a quarter inches…then I shot three straight “holes in one”.

I think I worked out the sight problem. 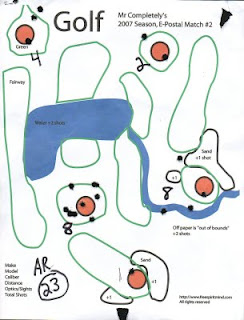 This was shot prone using a web sling at 25 yards. I REALLY couldn’t see the dots here. In fact, the only feature on the paper that I could really pick out from that distance was the blue water.

The only hole I really had trouble with was the middle right one. As I said, I couldn’t see the dot and I was having trouble convincing myself that I needed to have the sight that close to the edge of the paper to hit it. After slicing the first three shots left* (and two into the water…much like when I really play golf), I finally convinced myself that I needed to put the sight closer to the edge of the paper and immediately got a hit.

I also had some trouble with the middle left hole, but made a good group around it…just couldn’t hit the dot to save my life. I put 8 shots into an inch and a quarter. At 25 yards with iron sights without using a rest…I’ll take it.

Although I didn’t score as well as I would have liked on any one target, overall, I was very happy with my performance with all the guns I used…and with the guns themselves.

It just goes to show that old, fat and half blind, I can still put hot lead on target when push comes to shove.

*For most golfers a slice goes to the right and a hook to the left…however, I’m left handed so, for me, going left means I sliced.