In Part 1, we introduced the series and talked about tools.
In Part 2, we installed the magazine catch and trigger guard.
In Part 3, we installed and adjusted the Jewell Match trigger. 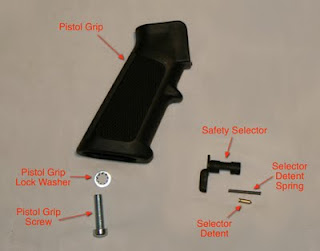 The pistol grip has to be installed at the same time as the safety selector because the pistol grip is what holds the selector detent and detent spring in place. 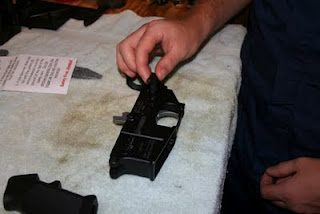 The first step to installing the safety is to cock the hammer.

Astute observers may note that the hammer is not cocked in this picture. I took the picture as my son was trying to get the safety to drop in. It took us a few minutes to figure out why it wouldn’t go. When we did figure it out, I didn’t think to re-take the picture so you’re stuck with a picture of how “n0t” to do it.

Anyway, with the hammer cocked, the safety selector should drop in from the left side of the receiver.

This would be a good time to check the operation of the Safety Selector. I had no problems with mine, but you may have to readjust the trigger or even do some fitting on the safety to ensure that it operates correctly. 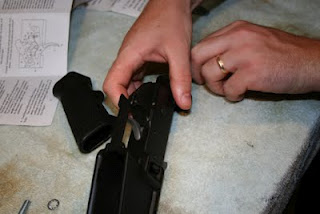 With the safety selector inserted fully into the receiver, turn the receiver upside down.

There is a small hole in the right side of the receiver next to the pistol grip mounting area. The detent goes into this hole with the pointy end toward the safety selector and the flat end visible. 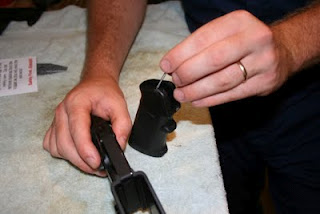 The selector detent spring goes into a hole in the right side of the pistol grip. 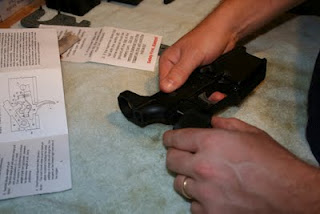 With the detent in place in the receiver, and the spring in the well in the pistol grip, install the grip onto the receiver. Be careful to mate the end of the spring with the flat of the selector detent as the grip goes into place. 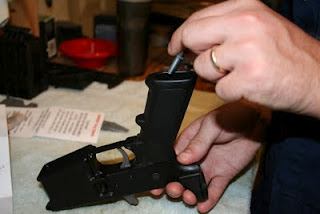 Put the lock washer on the pistol grip screw, then install the screw through the bottom of the pistol grip. My grip screw was a straight slot, but different makers may use different screw types. The picture notwithstanding, It is actually easier to get the screw in the hole inside the grip by placing the screw on top of the screwdriver, and then lowering the receiver and grip onto it. Dropping it into the grip and hoping it finds the hole can work…but generally not on the first try…or second…or third…or tenth… 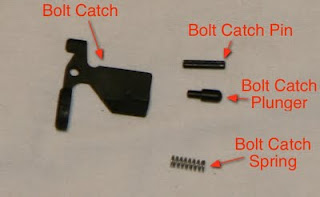 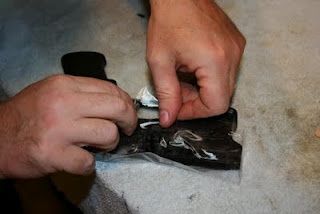 Installing the bolt catch is where the packing tape comes in. Some people us duct tape or masking tape but I don’t like either of those options because the glue is too hard to get off later. Painters tape would probably work, but I’ve had very good luck with clear packing tape. it protects the finish, but comes off easily afterward.

Installing the bolt catch requires you to drive in a roll pin along the length of the receiver. If you don’t protect the finish, you could damage it with the pin punch or hammer as you are driving the pin in.

Basically, you want to tape the left side of the receiver, both above and below the bolt catch mounting ears, but be sure not to block access to the well that the bolt catch goes into or the pin holes in the mounting ears. I usually use a double layer of tape to be sure it’s thick enough to protect adequately. 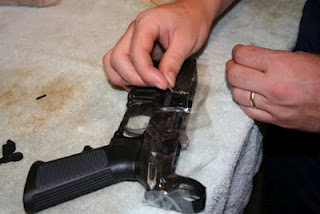 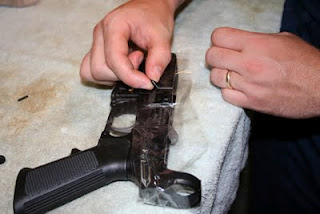 Then the plunger goes into the same hole over the spring. 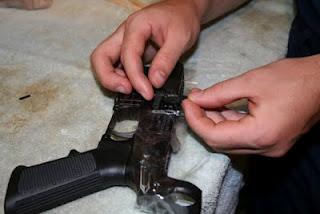 To seat it completely, you’ll have to press it in against the spring tension of the plunger and plunger spring. 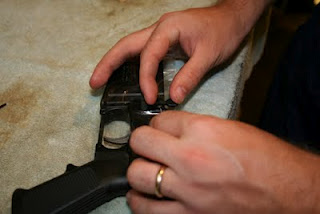 Then, from the rear of the receiver, slip a pin punch through the pin holes of the mounting ears and the bolt catch to hold them in position and keep the holes aligned as the pin is going in. 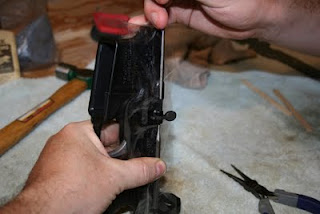 This is the point where, if you don’t have an extra set of hands as my son and I did this time, a hobby vise or lower action block comes in handy.

With the receiver on end, the objective is to drive in the roll pin which will push out the pin punch.

I generally get the roll pin started first by holding it in place with the small needle nose pliers and tapping it with a very small hammer or nylon mallet.

After it’s started, switch to a long pin punch to finish driving it in. I did this by myself when I assembled the first ARArmalite Rifle - The official designatio... More (Barack) last spring so it is possible to do it as a one person operation…but it sure is easier when there are four hands involved.

Once the pin is fully seated, the tape can be removed from the receiver. 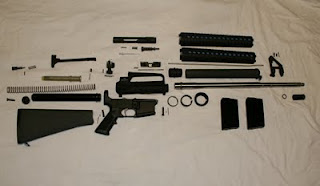 And here’s where we stand.