I left right after work on Thursday hoping that traffic wouldn’t be too bad. The plan worked fairly well. It took me about 45 minutes to get through the Hampton Roads Bridge Tunnel, but after that it was smooth sailing the whole way. The weather was great. It was a bit cloudy as I left Norfolk, but I drove out from under it before I got to Richmond and it was clear the rest of the way.

After the sun went down, there was a full moon so bright that, at one point, it was glaring off my instrument panel so badly that I couldn’t see my speedometer without blocking the moonlight with my hand. 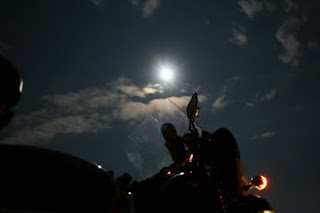 I stopped in Kentucky and tried to take an artsy fartsy picture, but I guess the tripod wasn’t stable enough for the long exposure time needed so they all came out blurry. This was the best of the lot, not good, but you can get an idea of what I was shooting for. I had a couple that was set better so that the moon wasn’t glaring so badly , but they were so blurry as to be unuseable.

That’s about as artistic as I get.

I took my time and took a couple of long breaks, which got me to Indianapolis at about 0630 Friday Morning.

I was staying with a buddy and his family. At that time of the morning, I didn’t want to just ring the doorbell and wake the whole house up. 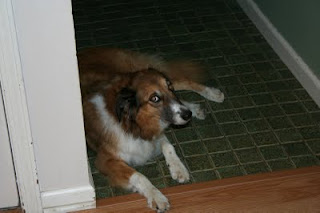 I thought there was a possibility that they would have left the door unlocked because they knew I might get there early in the morning. As quietly as I could, I opened the storm door and gently tried the knob. Not only was it locked, but their vicious and deadly trained attack dog heard the tiny noise that jiggling the knob made and started barking like crazy.

She may not present a very intimidating visage, but she makes a heck of an alarm system. 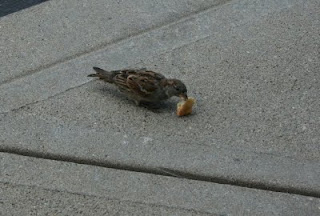 Anyway, I spent Friday with them. We went out and did a little shopping, went out for lunch and fed the local fauna.

Went and picked up a friend from the airport.

I even got a chance to take a nap in the car…actually several: each about 20 seconds long.

No one minded except when they were talking to me before realizing that I was out again.

Those little unintentional cat naps refreshed me amazingly and I was fine after that until I went to bed at about 9:30 that evening.

The next morning we went to Synagogue (did I mention that my buddy and his family are Jewish?). A first for me. It was very interesting and I received a very warm and friendly welcome. Luckily for me, they print their readings and texts in English as well as Hebrew so I was able to follow along quite well even though I couldn’t understand a word of the actual service. It was also interesting in that my friend assured me that at least four or five of the other attendees would be just as well armed as he and I were.

Strangely, no violence broke out and, if you didn’t know that there were armed people around, you would never get the impression that it was as dangerous an environment as Paul Helmke and Nancy Pelosi continually assure me that it was.

Anyway, after the service, a very nice lunch and some more fellowship, I headed toward Tipton to hang out with my Mom for a little while before her 70th Birthday party. 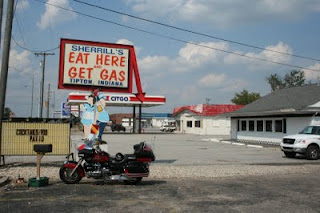 I had to make the obligatory stop at Sherrill’s on the corner of 31 and 28…unfortunately, they’re currently closed for renovations so I could have neither eaten there, nor gotten gas even had I wanted to. 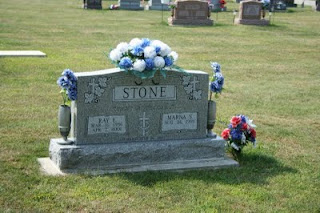 Also, on the way, I stopped by to pay my respects to Dad and reflect for a moment. His plot looks well cared for as I expected.

The secret about Mom’s party had already slipped out, but she didn’t know who all was going to be there. I would judge it to be a great success. The only family members that didn’t make it were my son and his family and my younger brother’s daughter. Both due to work obligations. 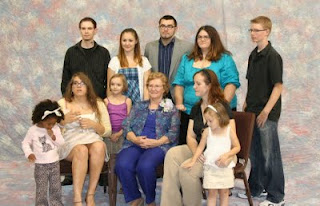 Before the party started, my sister-in-law had arranged for a professional photographer to take family pictures. This is Mom with all of her grandchildren and great grandchildren that made it.

This isn’t the official picture, this is one that I snapped while he was still getting them situated in the pose. The actual portraits should be up on his web site today and we’ll be able to order from there. 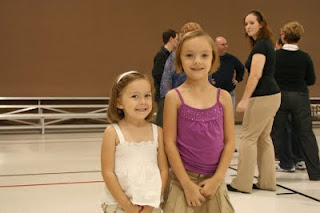 I got some pretty good shots of family while I was there but I won’t bore you with too many, however this one just came out too cute to pass up on posting. Two of my grand-daughters with their mom in the background looking on.

I think we had a really good turnout. 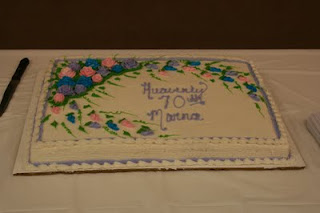 Mom’s husband did a really good job of setting it all up and organizing it. We had a short program with my brothers and I singing a couple of songs, friends and family expressing their appreciation for my Mom, a couple of silly games and then…CAKE! 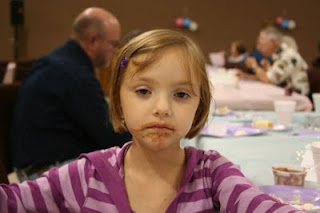 “I can’t believe I ate the WHOLE thing” 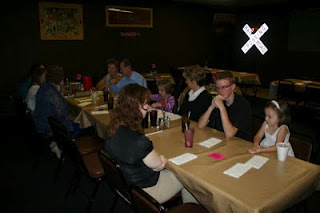 After the party, most of the immediate family retired to an old haunt of ours…Pizza Shack. Pizza Shack’s pizza has a very unique flavor. It is unlike any pizza I’ve ever had anywhere before. I like it quite a bit and try to eat there at least once any time I’m in town. What’s interesting is that my little Brother has never really liked Pizza Shack Pizza, but he was the one who suggested going this time.

I did a double take and said “YOU want to go to Pizza Shack???” He said “Sure…who doesn’t like nostalgia pizza?”

When we were young, Pizza Shack had a juke box. We and some friends of ours loved the group Foreigner at the time and always played “Hot Blooded”, “Cold as Ice”, “Head Games” and a few others every time we were in there (which was quite often). To this day, any time I hear any of those songs, I can actually smell Pizza Shack pizza for a few minutes.

The next day was the family reunion. Most of us started out the day by going to church at Tipton Trinity Wesleyan where we went growing up (two religious services in two days…do I get extra credit for that?). Mom played the keyboard for the offertory (and tried to kill herself by throwing herself down the platform steps afterword…sigh…luckily she didn’t succeed and ended up with just a sore knee) and my younger brother along with his wife and son sang a beautiful trio for the “special music”.

After that we headed out to the bustling metropolis of Ekin (population about 20…in Indiana, any intersection with a stop sign and more than three or four houses in close proximity has a name) for the reunion.

Again, I took lots of pictures but I won’t bore you with most of them. One thing we did was take pictures of each family group and then one big picture of everyone. We had a couple of visitors that had a pile of cameras around them and took pictures for everyone.

Uncle Ron said that he counted (IIRC) 78 people there and we only had about 20 or so missing. 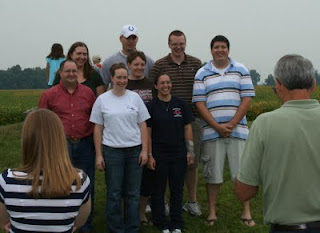 This picture gets special mention.

The guy in the Colts hat standing in the back is the son of one of my cousins (would that make him a second cousin? First cousin once removed? I can never keep it straight).

I didn’t catch what service he’s in but he just got back from his third tour in Iraq last Friday. Uncle Ron made a special point of bringing him up to the front and he got a standing ovation from the family.

The daughter of another cousin is engaged to an Air Force service member who’s in Iraq right now. Our family doesn’t have a huge military tradition, but every branch and generation of the family has provided at least a couple of service members.

And, finally, after the reunion was over, we all adjourned to the camping area in Uncle Ron’s sideyard. This is where many of the family members stay over the weekend of the reunion. Some get there as early as the Wednesday before and make a regular vacation of it. 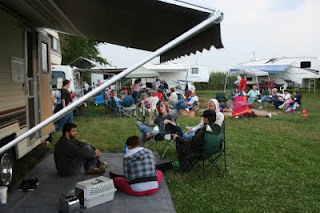 It is a great time and I really enjoyed it. I only wish that my wife and my son and his family had been able to go.

I left to come home yesterday morning at about 10:30.

The weather was OK. It was cloudy most of the way but I only got sprinkled on a couple of times all the way until I got to Richmond.

I was on track to make it home in 12 hours, but had a slight unplanned delay: As I was driving down 64 just before Williamsburg, The car in front of me drifted into the rumble strips over the left side yellow line. I don’t know if he had fallen asleep, was distracted or just wasn’t paying attention, but the rumble strips apparently startled him. He jerked the wheel to get back onto the road and lost control on the wet asphalt.

After fishtailing a few times, he ended up in the median ditch, slid sideways for 50 yards or so and then the car overturned and slid to a stop on its roof.

I stopped as quickly as I could, got my phone out of the trunk of my bike and called 911. I was so close to him when it happened, that by the time I got stopped, I was down the road a bit past him so by the time I got the call made, got across the road and back to where he was, there were already a couple of other people stopped and helping the driver.

Luckily, he was wearing his seat belt and wasn’t hurt. The sad thing is, as great as it was that so many people stopped to help, as soon as everyone was satisfied that he wasn’t injured and that the car wasn’t going to blow up from leaking fuel or anything, everyone else got in their cars and took off. I was the only one who hung around until the Police and fire department got there.

No biggie…other than the fact that we sat there for 35 or 40 minutes waiting for the cop to get there (the fire department was on scene within 10 minutes or so). I told the cop what I saw (primarily to let him know that the guy hadn’t done anything criminal…just stupid), he took my information and I was on my way.

Can’t take a motorcycle trip without some excitement. It’s mandatory.