According to Fox.com, the perpetrator of the Fort Hood atrocity used a simply MASSIVE handgun in the attack:

The initial investigation shows that Hasan allegedly used only one gun during the attack — a 5.7-caliber semiautomatic pistol.

Hmmm. For some perspective, here are some empty shell casings from various size guns that I’ve collected over the years. From left to right click pix to make bigger: 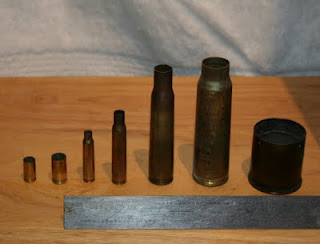 The silver thing is a standard 12″ metal ruler for scale.

Unfortunately, I don’t have anything in 5.7 caliber to compare with…but, as a remnant of my Navy career and many years I spent on Destroyers and Frigates, I do have an empty shell casing from a 5 caliber gun.

5 caliber is close enough to 5.7 caliber for comparison purposes isn’t it?

I wonder what the recoil from a handgun that shoots one of those things would be like?

I wonder if a 5.7 caliber handgun uses a single stack or double stack mag?

Isn’t it a good thing those main stream media outlets, unlike we lowly bloggers, have LAYERS of editorial oversight? Without that, they might make ridiculous mistakes that make them look like fools.

18 thoughts on “LAYERS of editorial oversight”