My first instinct when I heard this “breaking story” was that someone had just successfully fenced a buttload of stolen weapons through the LAPD:

But they were surprised at the man who pulled up in an SUV with 58 guns — mostly small handguns but also some assault weapons. Dressed in a sweatshirt and jeans, the mystery man offered his cache in a nonchalant fashion.

As is the policy for such events, the deputies asked no questions and eagerly took the guns. They don’t know the man’s name, and the donor declined to comment to The Times.

After unloading his weapons, the man received several thousands of dollars in supermarket coupons and drove away.

Upon further review, however, I changed my mind.

In light of this photo of the “assault weapons” that accompanied the article, I have now come to the conclusion that the LAPD just used taxpayer money to pay some enterprising young man “thousands of dollars” for some really fancy scrap metal.

I’ve got plenty of old 2×4’s laying around. I wonder if the LAPD would give me thousands of dollars in coupons if I carved them to look like “assault weapons”, painted them black and turned them in?

I realize that the Police are generally not firearms experts by any stretch of the imagination, but that’s a bit ridiculous.

These “buy back” programs are useless “feel good” wastes of money on their face, but compound that with the weapons “expertise” of your typical Police Officer and it’s a recipe for wasting thousands of dollars getting useless junk “off the streets”.

[Update] Just for clarity’s sake, this is what a real AR-15 looks like, from about the same angle: 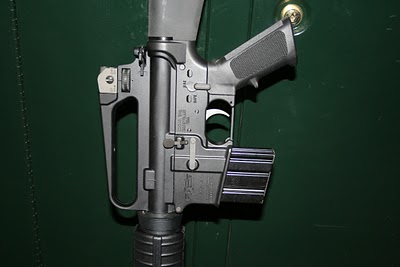 2 thoughts on “The scrap metal buy back program.”