I didn’t think it was appropriate to include this in my last post, but during the Patriot Guard mission today (actually, yesterday now…it’s after 1am), I ended up with an interesting picture I thought I’d share.  Hopefully you’ll get a chuckle out of it.

I have a cheapo digital camera that I use on the bike when I’m taking “action shots” in motion.

I’m generally pretty good at just holding it up over my head, pointing it in the right general direction and pressing the trigger.  I don’t think I’ll win any awards with my photography that way, but I usually get some passable shots, even when I’m pointing the camera to the side or behind me.

Well, today (yesterday) I did a horrible job of trying to get shots of the procession behind me.  In fact, I didn’t get one single useable picture…but I did get this shot: 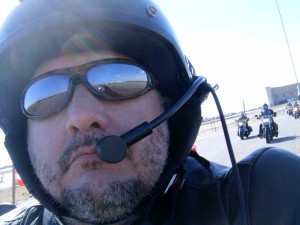 I can’t imagine what I was thinking holding the camera that low.  Maybe I pulled the trigger accidentally before I got it up over my head where I wanted it?  Good thing that wasn’t a .45 I was trying a trick shot with…I’d have blown my own face off.

You can even see the reflection of the camera in my hand in my glasses.

Not exactly what I was shooting for (pun intended), but worth a chuckle or two anyway…after you get past the gag reflex that my ugly mug generally induces anyway.