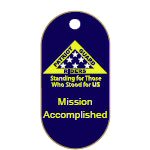 He was raised in Chesapeake and, despite some troubled times in his youth, chose the higher, harder road than many of his contemporaries and joined the Marine Corps.  In the interview video embedded below, as is mother pointed out so poignantly,  “He didn’t die on the streets.  He didn’t die doing crimes.  He died with dogtags around his neck…he died with honor.”

I haven’t had many opportunities to participate lately as most of these missions happen during the week and most of them in this region are centered around Arlington, but I was glad to have had the opportunity to play my small role in this one. 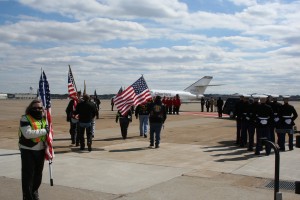 Today, we escorted LCpl Dunn from the aircraft that brought him home to the funeral home.  On Tuesday evening there will be a memorial service where we will stand our silent vigil, and then he will be transported and interred at Arlington on Thursday.

We had a pretty good showing: There were about 30 Patriot Guards at the terminal to render honors as LCpl Dunn was transferred from the plane to the hearse. 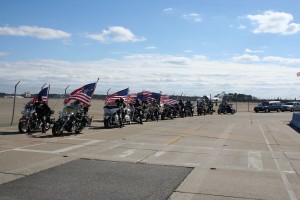 With about 20 bikes and 4 cages for the escort.

But there were another 15 bikes or so just outside the base waiting to join the procession as we rode by. 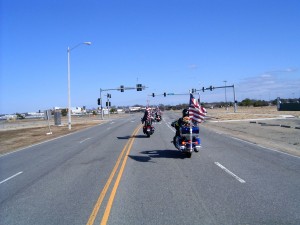 So for the majority of the procession we had somewhere around 35 bikes, and 4 or 5 cages. 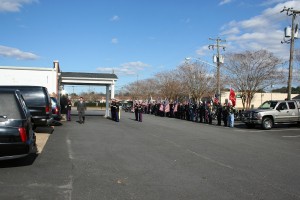 And about 50 people to render honors at the funeral home. 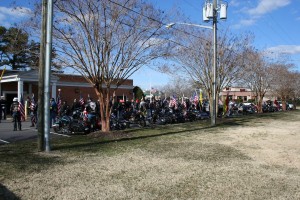 Not bad for a chilly Saturday afternoon.  I can only hope that our contribution provided the family and friends of our fallen comrade some small comfort in this time of grief and sadness.

Finally, the family did invite news crews to document the event.  I saw vehicles from both Channel 3 and 13, but the only report I’ve found so far is from channel 13.

As I’ve said in past posts of this kind, it is my sincere hope that I never have occasion to participate in another one of these sad occasions…but as long as our military members continue to give that last great measure for their countrymen, the Patriot Guard will render honors and play our minor part in support of the families of the fallen.

4 thoughts on “A milestone, but not a happy one.”