Have I ever mentioned my “Road Name?”

A road name is a nickname by which a biker is known amongst his biker buddies.  It probably originated with the biker gangs, but is also fairly common among some groups of law abiding bikers as well.

You don’t get to pick your road name.  It gets picked for you.  If I could have picked my own, it probably would have been “Sailorcurt” (imagine that), but alas, it was not to be so.

Some road names are intended to be funny: one guy I ride with is known as “Shoebox” because he keeps a shoebox full of road maps in his saddlebag.  Whenever he’s in the lead and takes a motorcycle shortcut (gets lost), he breaks out the shoebox to figure out where we are and where we need to go. He resisted that one at first, but it stuck and he’s since embraced it.  The personalized plate on his anniversary edition Harley Soft Tail Classic is “SHUBOX”.

Some are ironic like the standard 6’6″ 275 pound linebacker type called “tiny”, or the meek, mild mannered friendly guy called “bear”.  Some are just deemed to be fitting, like the guy who loves to do wheelies on his tweaked and tuned Harley Sportster and is known as “Wheelie”.

All this is getting to my road name.  I got lucky and didn’t get stuck with a funny name in honor of some bonehead stunt or idiosyncrasy.

It only took about three or four times of my biker buddies seeing me tooling down the road like this. 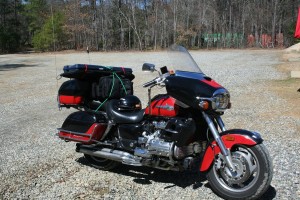 Before they settled on my road name. 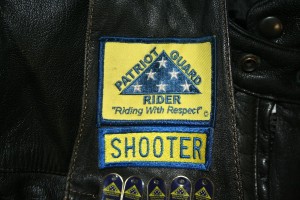 Actually, that’s not even a lot.  I’ve ridden to the range with as many as five rifles strapped across the back, as well as the range bag with pistols in it and the ammo cans, targets, and other accessories that you can’t see stuffed into the cargo boxes.

I took a half day off work on Wednesday and went out to the range for some quality time with my Match Rifle.  I also got in some “from the holster” and “moving while shooting” pistol work, and finished up down at the skeet range with a borrowed 20 Ga Baretta semi-auto to practice a bit before the 4H shotgun instructor class next weekend.

I have to say that I’m very excited about the upcoming Navy rifle matches next month (it’s not too late to register!).  I’m shooting well and, other than an issue with the keepers on the sling I bought, the rifle is a dream come true.  I’m hoping to better my traditional “middle of the pack” finish considerably this year.  I can’t wait.

In other news…MAN, my bike needs to have winter washed off something terrible doesn’t she?

Hopefully I’ll get to that this weekend.