Like any gunnie, I’m always in the market for a good flashlight, but I’ve never felt the need to drop a hectobuck or two on one, so I’m  always on the lookout for a bargain.

Almost a year ago, I picked up a Coleman 75 lumen LED flashlight at Walmart for about $25.  I was very happy with the light, it wasn’t like, the best thing since sliced bread or anything, but it was plenty bright, the batteries lasted a long time and it seemed pretty well made.

I probably would have been fine with that light for a long time had I not accidentally dropped it down into an interior wall in my house while crawling around in the attic a couple of weeks ago.  Heck, for all I know, it may still be lit up in there.  I didn’t think it was worth it to rip a hole in the wall to get a flashlight out so I just decided to write it off and get another one. 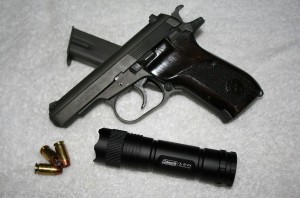 Unfortunately, when I had a chance to hit Walmart again the other day, they didn’t have the same light in stock any more.  Fortunately, they had an even better deal.

It takes three AAA batteries and has a listed run time of 2 hours. 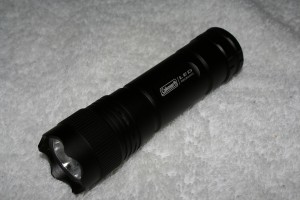 It has a crenelated “strike” style bezel, is all aluminum, water resistant and seems very solidly put together. 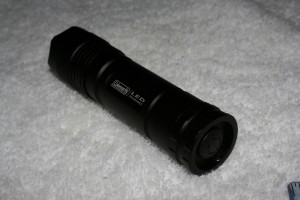 It has a recessed rear push button on/off switch that has a very solid feel when actuated. 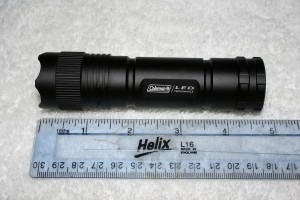 …and about 4 and 3/4 of an inch in length.
It does have some down sides:  It’s a little larger than I’d like, not unwieldy, but slightly bigger than some other 3AAA flashlights I’ve had (including the one that’s still in my kitchen wall).

The switch has a momentary mode, but it only works after the flashlight is turned on, to turn it off momentarily.   I prefer a switch that allows you to leave it off, but turn it on momentarily when needed.

It comes with a wrist strap, but no belt holster so you’d have to buy a generic holster to carry it on a belt.

And the beam is not adjustable and it does not have fancy flashing modes or variable output power.

Those negatives are actually pretty minor when you get right down to it.

So, how does it stack up as far as beam quality and brightness? 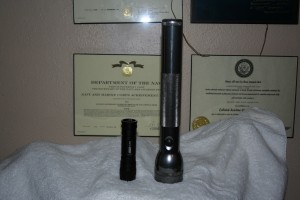 I don’t have a high dollar streamlight or surefire to compare it to…I just can’t make myself spend that much money on a flashlight…but I do have an old-school incandescent, three cell Mag Light that was my standard for years before LED lights started coming out.   So, how does a modern, high output LED light stack up against a Mag Light?

Better than very well as a matter of fact.

I put fresh batteries in the Mag Light to make it as bright as possible. 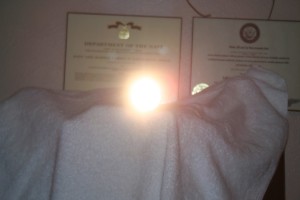 The first thing I did was compare them straight on.  One of the uses for a flashlight as a defensive tool is to blind an attacker.

I took the pictures with the camera on the same settings (ISO 100, shutter speed 1/20, f5.6, flash on.  I used the flash so that the lights wouldn’t completely wash out the picture to, hopefully, allow for a better comparison.

This is the Mag Light.  Not too bad. 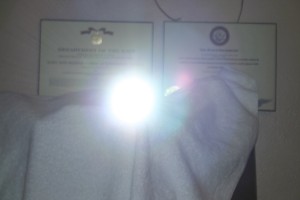 But it pales in comparison to the Coleman LED light.

Although this one isn’t one of those 230 lumen monsters that can heat your lunch for you in a pinch, I’d say this one does a pretty good job.

The light is more blue and seemed much more intense than the Mag Light.  It caused me physical pain to look into and I had to wear sunglasses in order to take the picture. 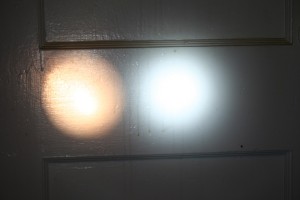 How about the beam pattern.  Is it clean and concentrated?

This is from about 1 meter.  The left beam is from the Mag Light. The beam pattern has more defined edges but is distinctly asymmetrical and inconsistent, as well as being a softer yellowish color and noticeably less intense.

The Coleman light’s beam edges aren’t as defined, but the beam pattern is much more consistent, the light has a harsher bluish tinge and is significantly more intense. 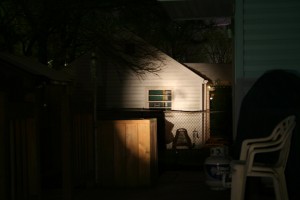 And finally, what about at distance?

This is at a distance of about 100 feet from my backyard onto the back of the neighbor’s garage.

Again, the Mag light casts a yellowish, fairly soft light.  The beam has very well defined edges, but is inconsistent and there is a noticeable dim spot in the center of the beam. 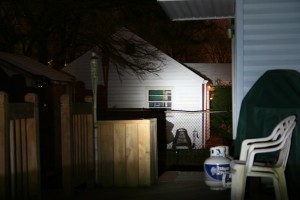 The Coleman light is distinctly more intense, even though more diffused without distinct edges to the beam.  The light is, however, very uniform with no dark spots or noticeable imperfections.

Again, the two pictures were taken with exactly the same camera settings.  I used a tripod and had the lights sitting on a table so they’d be stable for the long exposure time required to get decent pictures.

It may not be a tacticool $250 streamlight, but I have to say that this is the second Coleman LED flashlight I’ve had that has very much exceeded my expectations.  I’m very happy with it and I think if you’re on a budget but looking for a very serviceable, bright, practical flashlight for everyday use, it would be hard to beat the value of these little Coleman lights.

FTC Disclaimer:  I received no remuneration, perks, swag, discounts, coupons, trips to Hawaii, airline miles, booze, hookers, limousines, court-side seats, scooby snacks, swift kicks, letters patent, kind words or any other consideration from any of the companies or producers of the products mentioned in this review…although I probably wouldn’t have turned them down had any been offered.  All rights reserved.  Void where prohibited.  Your mileage may vary.