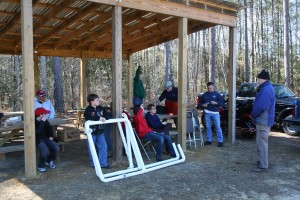 Chief Instructor Dale and I taught 6 boy scouts about shotgunning. I didn’t take a bunch of pictures because I was involved with the kids too much and just didn’t have time to worry about pictures.

One of the older kids was a downright natural. He broke the first bird he saw and didn’t stop until we ran out of time. I think he only missed three or four all afternoon (the one in the red shirt sitting in the front with his hand up).  All the boys did really well and even the ones who started out a little rough were breaking clays regularly by the end of the day.

Dale talked to me about getting more involved in the shotgun instructing.  The only problem is that I don’t have much experience in the shotgun disciplines.  I’ve got experience shooting and maintining them, and I know the basics, but I’ve never participated in organized trap, skeet or sporting clays shoots.

So, the first step is going to be getting some more experience in the shotgun sports.  I’m going to start by hitting the 4H instructor training class later in the month…assuming I can get registered for it successfully before Friday.  At some point I’m going to have to get a shotgun that is more suitable for this type of shooting and just start practicing.  I can’t really afford it right now with our financial situation the way it is, but I’m going to start checking the auction sites and classifieds and see if I can find a decent used over/under or semi-auto for cheap.

Then I guess I’ll be getting more involved in the 4H “Swamp shooters” shoots that happen two Sunday afternoons a month.  I’m going to help out with the First Steps pistol class next weekend, the Fleet Forces Command – Atlantic and All Navy rifle matches are the last two weeks in April (gotta get registered for that asap as well), I’d like to hit the NRA annual meetings this year since it’s in my neck of the woods for once (that’s in May) and then there’s the Women on Target shooting clinic that I’ll be helping out on the rifle clinic for….

It’s shaping up to be a very busy spring.