I never got a chance to shoot last month’s edition of Mr. Completely’s e-postal match, but I had some time yesterday so I hit the range and gave this month’s match a shot…so to speak.

This month’s match is being hosted by JimmyB at the Conservative UAW Guy and is called Rounds and Rounds.

The object is to fire 13 shots at the 13 circles.  Each hit scores the number of points as the circle number.  Circle 1 scores 1 point, circle 6 scores 6 points, etc.  But each circle can only be counted once.

I suppose one could expend all of their 13 shots in getting hits on the highest numbered circles to try to get the highest points possible, but I just decided to keep it simple and try one shot per circle.

I think I did OK with that strategy, but since there’s plenty of month left, I may try it again using the “go for the high points circles first” technique.

I also only shot it with my 1911 and my .22 pistol so I’ve still got several more guns I could try it with.

Anyway, with no further ado:  my results.  Click pix to make bigger. 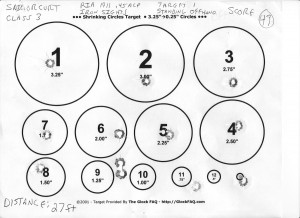 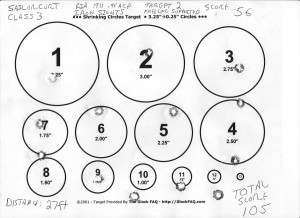 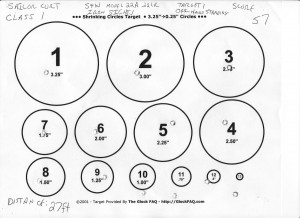 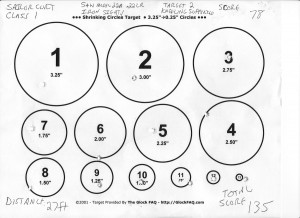 You might notice that there are only 12 holes in the standing off-hand 1911 target.  I know I didn’t miss the paper with any so I apparently miscounted when I loaded the magazines.  I didn’t score them until after I got home, so I didn’t realize it until I wasn’t at the range any more.  Thinking back, I remember having questioned my count as I shot that first target but I assumed that I’d loaded the mags correctly and miscounted while I was firing.

Anyway, like I said, I may get a chance to re-shoot and better my scores by the end of the month; but, if not, at least I got some entries in.

As a reminder, Cheaper Than Dirt is donating a $50 gift certificate for each month’s match this year.   Since the match itself is on the honor system, the certificate is being awarded by random drawing to anyone who enters the matches, so get your entries in…even if you didn’t shoot well you still have a chance to win.