As I mentioned a couple of posts ago (which was a while ago, sorry), My son graduated from Old Dominion University last weekend.

But I digress.  The point of this post is the project I was working on for his graduation gift.  I wanted to give him something significant and meaningful, but didn’t have a bunch of money to spend…so I decided to use something I already had as a base for the gift and just put in the time to make it special.

He had gotten his concealed handgun permit as soon as he turned 21, but has never had the money to buy a gun to carry.  I happened to have a couple of “spare” CZ-82’s which are great little guns for concealed carry and are pretty much ideal for lefties (which he inherited from me), so I decided to do a complete rehab and refinish on one and give him that for a graduation gift.

As with my carry gun, I did a detail strip, sandblasted the major parts and parkerized it, lightened the magazine catch spring, did a basic trigger job and put a 16 lb Wolff recoil spring in it. 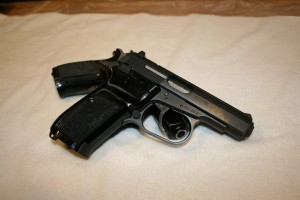 I’m very happy with the way it turned out and he was very happy with receiving it.  It’s not as high speed-low drag as many other handgun models out there, but I’ve found them to be reliable and accurate and I hope that the work I put into it will give it some sentimental value to him someday. 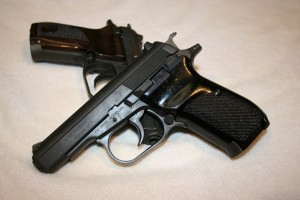 I didn’t have the money to buy new grips for it yet, but that will be in its future (maybe Christmas or a birthday?) 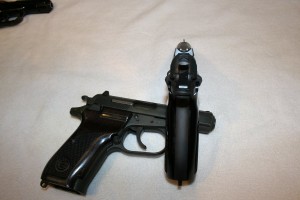 After refinishing the metal, I repainted the sights and protected the new paint with clear nail polish.

The only thing I’m unhappy about is that it actually came out better than the one I parkerized for myself. 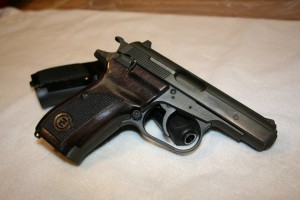 Although I’m happy with mine and the finish has proven durable and lasting (I’ve been carrying mine daily for over a year now), the finish came out a bit lighter green than I was expecting.

I re-used the same parkerizing solution to do his and his came out more of the dark Charcoal gray that I expected with mine.

Either his gun ( a bit newer than mine based on the serial number) is made of a different alloy, or, more likely, the parkerizing solution just needed a bit more seasoning to get that full, deep color.

Now I’m considering re-doing mine to get it the color that I want.

One thing that was different about his is that the mainspring plug and lanyard loop is made of aluminum rather than steel so I couldn’t parkerize it.  I didn’t realize this until I was in the middle of sandblasting it so I already had it stripped.  I just used Birchwood Casey’s Aluminum Black on it to protect and match the finish as well as possible.  In the future, I’ll know to check that before I start going crazy with the sand blaster. 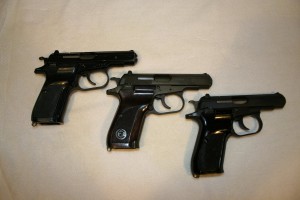 Here is a picture of all three of the CZ-82’s in my collection.

The top left one is the one that I haven’t refinished yet.  Its original finish is in the best shape of the three and I may leave it stock.

The middle one had the worst finish to start out with.  It was very beat up  when I got it.  That’s the first one I refinished and is the gun that I carry every day.

And the bottom right one is the one now residing in my Son’s gun safe and that I hope he will be carrying regularly from here on out.

I’m very satisfied with how it came out and I hope he’s as pleased with his as I am with mine.

BTW:  No, the serial numbers have not been filed off.  I used Gimp photo editing software to smudge them out in the pictures.