I know, I know…I’m late, as usual.   I haven’t been playing much in Mr. Completely’s E-Postal matches this year.  Pretty much any chance I get to go to the range, I’ve been there to teach so I haven’t gotten much shooting time of my own lately. Also, since the wife’s been out of work for so long, money is tight and I just don’t want to shoot up all my ammo and not be able to replace it, so I just haven’t been shooting much.

Be that as it may, It’s my turn again to host the match.

Since I’m out of original ideas for these things, I’m going to recycle one from a few years ago.  I was actually looking for a different one.  I remember creating a set of four silhouette targets where the gray “no shoot” target was partially obscuring the black “shoot” target.  I wanted to use those again, but I couldn’t find them.  If anyone remembers where to find them, please let me know and we’ll use them the next time I host a match.

This match is designed to duplicate a drill I regularly perform, while making it standard enough to score.

The idea is to simulate shooting your gun dry in a defensive situation, reloading as quickly as possible, and continuing the engagement effectively.  It would be ideal to begin with your pistol holstered in your normal carry rig, but some people don’t live in free states/countries and don’t carry and some ranges don’t allow drawing from a holster and firing, so we’ll eliminate that factor from the match.

Without further ado:  a blast from the past: 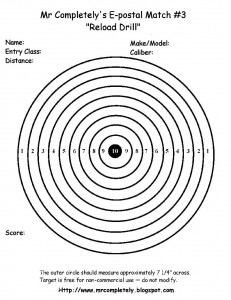 This match is pretty simple but incorporates a skill that those who carry defensive arms should be practicing regularly. It is intended specifically to be performed with a firearm that you carry for defensive purposes. For that reason, a special class is being instituted for this contest.

The match will require two targets (full size pdf of target here) posted side by side with the inside inner edges a couple inches apart (no set distance as target backers will vary and the distance isn’t critical).

The rules are simple. Load 2 rounds into the magazine or cylinder. A second magazine, speed loader, speed strip etc with two or more rounds should be on your person as you normally carry it (if you don’t or can’t carry where you live, you may start with your reload on the bench in front of you).

Start with your firearm in one or both hands either resting on the bench or at waist level, pointing downrange, finger off trigger (of course). The firearm should be in the “condition” that you normally carry in (or would carry in if you don’t or can’t). Typically for Single Action only, this is condition 1 (cocked and locked). For SA/DA and revolvers, condition 2 (round in chamber, hammer down (safety note: revolvers with no transfer bar should be hammer down on an empty chamber)); but, if you normally carry in condition 3 (no round in chamber), that is how you should begin this drill.

The shooting position is offhand, any stance, one or two hands. Preferably, use the stance that you would expect to use for defensive situations.

When ready, take aim and fire two shots at one of the targets, reload and fire two more shots at the second target. While speed can be important in a self-defense situation, shot placement is the key to stopping an attack (plus, not everyone has shot timers) so this will not be a timed event…however, you should shoot it as quickly as you safely can. Ideally, each set of two shots should be double taps, but if you don’t normally shoot double taps and don’t anticipate doing so in a defensive situation, two discrete, aimed shots is permissible as long as you do it quickly as you would in a defensive situation and not as slow, deliberate, “bullseye competition” style shots.

Repeat this drill 5 times for a total of twenty shots…ten per target.

Distance for this drill is the generally accepted standard self-defense distance of 7 yards (21 feet). If your range cannot accomodate that distance, you may shoot the target at farther than 7 yards, but not closer. In other words, if your range can accomodate 5 and 10 yards, but not 7, you should shoot it at 10 yards, not five. Be sure to indicate the distance on your target.

For scoring, a shot that touches a line between scoring rings will be counted as a shot in the higher ring.

Class 1: Any handgun, any sights but must be a firearm that you carry (or would carry if don’t live in a free state) for defensive purposes. Firearms entered in this class may not be entered in any other class.

The remaining classes are for your “fun guns” that you don’t regularly use for defense. If you don’t have extra magazines or speed loaders for these firearms, no worries: the same rules apply…reload and fire the second two shots as fast as you (safely) can.

Class 3: Open Rimfire (anything goes, as long as it’s a rimfire pistol)

Class 5: Open Centerfire (anything goes, as long as it’s a centerfire pistol)

The match is supposed to run until the last Monday of the month, but since I got it up a few days late, unless Mr. Completely has an objection, we’ll take it all the way to the end of the month.

To submit entries, send digital photos or scans of your targets to sailorcurt AT cox DOT net by Midnight Saturday, July 31st.   Be sure to tell me the score that you tallied, the type and caliberThe bullet or Bore diameter of the gun -... More of firaerm(s), anything unusual or unique that you want to relate about the match or how it went, the distance you shot it at and the name you want the entry posted under as well as url if you want your entry linked to your blog or web site.

Have fun and good shooting.