As Uncle is prone to asking:Why are anti-gunners so violent?

In closing…. If you attempt to walk into my bar with a concealed weapon and for whatever reason you didn’t conceal it enough…. You won’t have enough time to draw your piece cowboy. Your face will already be on the pavement. I promise.

I realize that this is nothing more than blowhard bravado from someone with serious insecurity issues, but I’m thinking that if “his bar” (I gather he’s an employee, not the owner) doesn’t actually post “no guns” signs and he follows through with what he claims he will do, he’ll end up an unemployed bartender in short order…not to mention behind bars for assault.

But, hey, WE’RE the violent ones right? 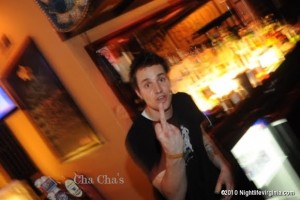 Update 2:  In comments, courageous Mr. Anonymous posted, without commentary, a link to the picture on the right.

It was obviously someone for whom intelligent discussion and reasoned debate aren’t exactly strong suits.

Hmmm.  I wonder:  who could it have possibly been?

Keep it classy there friend.

BTW:  I wonder how Cha Cha’s feels about the free advertising they’re getting.

Sure makes me want to run right out and spend my money there, how about you?