I started to leave this as a comment to this post over at Weer’d Beard’s place, but it got too long (surprise, surprise) so I decided to bring it over here.

His post was basically a link to a series of funny gripes purportedly written by FEDEX pilots and the signoffs that the maintenance people used to document the “solutions” to the problems.

The term “gripe” is slang.  The official term for a problem reported by pilots is a “discrepancy”, but pretty much everyone (at least in the Navy) uses the slang term “gripe”.

Not to rain on the parade but variations of that list have been around for a long time.  Where the list is supposedly from depends on where you find it.

I’ve seen similar lists (the “IFF in OFF position” one makes regular appearances on all of them) reported as actual gripes from the Air Force, Navy and Marine Corps and even once saw them reported as being from the British Air Force.  I have to admit that’s the first time I’ve ever seen them being claimed by a civilian aviation community.

That does not reduce the hilarity though, and many of them are very similar to gripes aviation maintenance people see on a regular basis…which is what makes them so funny.  The best humor is rooted in reality.

This stems from the fact that the pilots generally know relatively little about how the equipment they are trained to operate actually works.  When I wanted to get under a pilot’s skin I would ask them “Why is it that it takes a college education to break an airplane but only a high school education to fix one?”…but I digress. 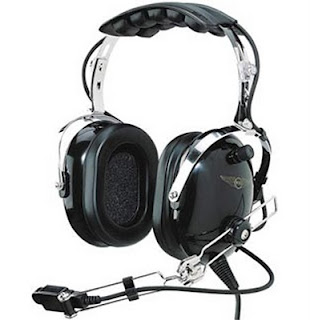 The funniest gripe I ever dealt with was when I was working on P-3’s when I was but a lowly Third Class Petty Officer.  P-3 Pilots don’t wear aviator helmets but use headsets with boom microphones similar to the picture on the right.

The Audio system allows the pilots to select specific radios to be heard in each ear.  The pilot can select one radio (or more than one) for the right ear,  and different radio(s) for the left ear, which can help them identify exactly who it is that’s talking to them based on which ear they hear it in.  It also helps to prevent the different radios from “walking on” each other and both transmissions becoming garbled.

I had a brand new pilot (actually still flying as a copilot) report that the audio channels were reversed.  I checked the radios and intercom system and they were working fine so I signed off the gripe “could not duplicate discrepancy” and didn’t think much more about it.

It is a faux pas for pilots to write gripes that get signed off that way because it often means they didn’t know what they were doing, so they get annoyed when we sign off their gripes as “could not duplicate”.

The next time the pilot flew (a different plane no less), he wrote the same gripe and complained to Maintenance Control because this was a “duplicate gripe” that had been signed off once already.  He was mad because I obviously didn’t know what I was doing when I made him look bad by signing it off the way I did last time.

The Maintenance Control Chief called me down to talk to the pilot.  I very patiently listened to him rant and rave about how incompetent I was for signing off his gripe when it obviously hadn’t been fixed because he had the same problem again today (it apparently didn’t even occur to him to be suspicious about the fact that he was having the exact same “problem” on two different airplanes).

I asked him very politely to demonstrate the problem for me and went out to the airplane with him.  We climbed into the cockpit and powered up the systems, he sat in the copilot’s seat, flipped the boom mike around and put the headset on his head.  He then proceeded to select UHF1 in his left ear and did a radio check with Maintenance Control.  “See!” he exclaimed.  “I’ve got the radio selected for left ear and the audio is coming from the right.”

I didn’t say a word.  I grabbed the earpieces in my hands, took the headset off his head, flipped the mike around again and put the headset back on his head so that the mike was coming from his left ear rather than his right and said “try it now.”

He didn’t even bother trying it again.  He uttered some expletive or another and just stormed off the plane…probably more embarrassed and/or mad at himself than mad at me.

I signed off the gripe: “Screwed Pilot’s head on straight, checks 4.0 on ground power.”

I don’t think that pilot said two words to me again that entire tour of duty.