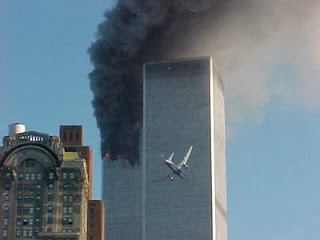 I posted my remembrance of that day several years ago.  My memories, nor has the story changed, so I’m just going to copy and paste the text from that page here.

I don’t have anything profound or new to add.  I only post it as a reminder:  Never forget.

I was a “Chief Selectee”.  I had been chosen for the honor of promotion to the rank of Chief Petty Officer, but had not yet been “pinned” with the venerable anchors.

I, and my fellow “slugs” were in the process of transitioning from just another sailor to “The Chief”.  For those who have been through Chief’s initiation, I need not explain.  For the benefit of those who have not been so honored:

In a nutshell, as a lower enlisted person, for any problem, no matter how seemingly insurmountable, there is always an avenue;  always a place to go for help;  there is always someone who you know will have the answer.  When wearing the blue uniform of the E-6 and below, the “final answer” to any problem is “Go ask the Chief”

Yes, you could learn everything you need to know over time, with experience and seasoning.  The problem is…once you become “The Chief”, there IS no time.  You ARE the experience and your job is to season the troops under you.

When a “blueshirt” says: “go ask the Chief”…he’s talking about YOU.  And you had better have the answers or know where to find them because there just isn’t anyone else to ask.  The lives of your fellow servicemen, the current mission, the ship, the battle group, the security of the country itself may depend upon “the Chief” having the answers when they are needed.  It is an awesome responsibility.

The trials and tribulations of evolving from a “blueshirt” to “The Chief” was the backdrop of my experience with 9/11/01.  We were to be “pinned” in four days…on Septemeber 15th.  This time that was filled with stress and pressure, with angst and doubt, with the unmitigated fear that we would not be up to the task that our country had seen fit to honor us with; this was the setting on that fateful day.

I was on my way from the hangar to one of the squadron training buildings where new pilots are hatched.  I heard on the radio that a plane had hit the World Trade Center.  I don’t remember if they specifically said a small plane or if that was just what popped into my mind, but my first thought was “what idiot could fly into a building that is over 100 stories tall on a beautiful, clear day like today???”

Quickly followed by the thought “An idiot that fully intended to fly into the building”.  I immediately turned around and went back to the hangar.  I wanted to be close just in case.

After getting back, I went to the Chief’s mess where there was a TV.  The TV was tuned to NBC and the coverage was ongoing.  Not too long after I entered the packed room and started watching, the second plane came into the picture and impacted with a fiery blast.  It was obvious to everyone at that point that this was no accident.  This was an attack, we were at war.

One of the most memorable things about the coverage was Katie Couric’s breathless (and clueless) question “do you think there could be a problem with their navigation systems?” after the second plane impacted.  I forever lost any respect I had for her at that moment…but I digress.

We immediately started prepping planes for launch just in case and we did get tasked with some of the radar coverage missions over the next few days.

Needless to say, the final days leading up to our receiving our anchors was a bit hectic and surreal and, truthfully, nothing has been the same since.  We were pinned on schedule and, even though security on the base was extremely tight, my mother was still there to place one of the anchors on my collar.  But what should have been a happy, triumphant occasion was permanently marred by the heinous and cowardly acts of a few crazed fanatics with box cutters.