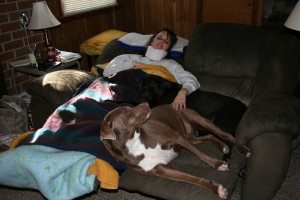 As regular readers may recall, we are the caretakers of two dogs.

This is them comforting Mommy after her last surgery a few months ago.

Normally, that’s about all they’re good for.

That and disposing of copious amounts of dog food at an astonishing rate.

Several years ago, I’d put a “doggy door” in the back door so they could come in and out at will without having to ask permission.

Now, keep in mind that this is a Navy town with  the largest Naval port, as well as one of the largest shipping terminals on the east coast.  I’m not real sure why ships are so notorious for this, but they are…being a town with so much maritime activity, we tend to have a very diverse and lively population of mammals of the order Rodentia.

I’m sure you can all figure out where this is going by now.

Yes, tonight (or rather early this morning), I discovered that the pooch patrol had been on the hunt and had left a present right in the middle of the kitchen floor.

Fair warning:  DO NOT click on this link if you’re squeamish or otherwise don’t like the sight of deceased critters.

Pretty good sized one for around here.  I’ve seen bigger brown rats, but not by much.

The dogs have killed them before, of course, but this is the first time they’ve brought one back into the house (and, yes…I know that they got it outside and brought it in, because I heard them blast out the doggy door a while ago…apparently when they caught wind of it out there).

The only thing that surprises me about it is that they don’t eat them outright when they get them.  They basically “play with it to death”, but then leave it alone after it’s dead.  I guess it makes sense…I wouldn’t eat a rat either if I had an alternative…but it surprises me a little bit that, to a dog, it isn’t just fresh meat.

They must not taste very good.

I hope to never have to find out.

Good doggies…go get some more.