Pretty much everyone should be well aware of the GPal (formerly known as Gunpal) payment service’s long standing, chronic and well documented problems.

Basically, they seem to have no problem receiving money through ACH and credit card transfers, but getting it back out can be a bit…um…problematic.

They have an entire forum area at Calguns.net dedicated to their company.  Recently, however, it’s basically turned into a place for everyone to report that they’re having exactly the same problem as everyone else.

Their Customer support is non-responsive both through e-mail or telephone and no one seems to be getting any straight answers.

If you checked any of the links above, you’ll find that either CEO Ben Cannon, or someone posting as “GPalVP” has been assuring everyone over and over and over that the problems have been fixed…but this has been going on for months now.

I am now numbered among the victims of the GPal scam.  Fortunately, the amount they owe me is much smaller than many, and I’m not the proprietor of one of the businesses that GPal has reportedly bankrupted, but it’s still pretty annoying.  I requested the $80 and change in my account to be transferred to my linked and verified bank account early in August.  On August 13, the transfer appeared on GPal’s web site as “completed” and my account balance went to 0.

As of this date, I still have not recieved payment to my bank.  How complicated is an electronic transfer to complete anyway?  I’ve been using ACH to pay my bills for going on ten years now without a single glitch.

At any rate, I signed up for an account on Calguns.net last night, and left a message on this thread* basically saying that we’ve been as patient and understanding as we can be.  It’s getting beyond that now; and so I asked if anyone had considered a class action lawsuit and suggested that it may be the best option.

*Update: the link isn’t broken per se.  They deleted the entire thread.  Covering tracks so to speak.  I have screen shots of the administrator admitting that he’d deleted posts from the thread and I’m pretty sure the thread OP has screen shots of the whole thing in pdf format.  I really don’t know what they think they’re accomplishing with the deletions, other than removing all doubt about what type of business they are running over there. /Update 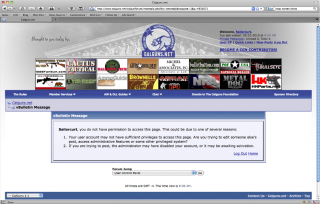 Signed up, posted a single comment (a comment that contained no accusations, no personal attacks, no name calling, no foul language, no offensive language of any kind) and was banned within ten minutes.

That’s GOT to be some kind of record.

Not only is GPal having major problems.  Not only are they refusing to admit that they are having problems.  Not only are they repeatedly misleading their customers by claiming that the problems have been fixed when they so obviously have not…they are actively deleting, and in some cases allegedly editing, forum posts to prevent people from talking about it and organizing to get some sort of satisfaction.

I was one of the early proponents of Gunpal/GPal and I’d like to say that it’s still a good company but is just experiencing some growing pains right now…but I simply cannot do that any more.

I removed the Gpal donation link from my sidebar, rescinded my recommendation to VCDL that they switch to their service and hereby offer the following warning to gun owners everywhere:

They have demonstrated themselves to be unscrupulous and completely untrustworthy.  Not because of the technical problems…but because of their inept, incompetent and flatly dishonorable handling of the situation from the beginning.

They are simply NOT the kind of business that I would recommend entrusting your money to.  Even if they get their technical problems ironed out, their handling of this situation has led me to the conclusion that they simply cannot be trusted.

I am going to begin looking into the possibility of a class action brought against this service.  Even people who’ve eventually gotten their money have been harmed by the delays and runaround they’ve been given.  Several small businesses have reportedly been forced to close their doors and people’s very livelihoods have been put at risk.

If you have been a victim of Gunpal/Gpal and are interested in participating in legal action against them, please e-mail me so we can coordinate efforts.

They may be able to delete posts and stifle discussion about this on their own forum, but they can’t stop me from talking about it here.

Update: re deleting the previously discussed thread, this is just too funny.

If you don’t want to bother with the link or the image, it’s a posting to the Calguns GPal forum from “GPalVP” and opens with this gem:

In an attempt to ease some of the anger, I tried to let people post whatever they wanted again.  it is not working so we are going back to a tightly controlled GPal forum

That’s just funny right there…in an infuriating sort of way.  Allow me to provide a literal translation of what he’s REALLY saying:

“We haven’t fixed the problems and people are still having to wait months to get their money from us (assuming they get it at all).  In lieu of telling our customers what was going on and what we’re doing to fix it, out of the goodness of our hearts we decided to grant our dupes customers the privilege of saying whatever they wanted (unless you suggest a lawsuit, of course…that one we deleted immediately) on this forum we’ve so generously provided you to use since we can’t be bothered to answer the phone or respond to e-mails.

Instead of gratefully accepting this gracious and benevolent gift we have bestowed upon you, you ungrateful b*st**ds just couldn’t stop complaining about us stealing your money could you?  Well, the party’s over now kids.   You should feel privileged that we even acknowledge your presence at all.

Now, if we’ve been holding on to your money interest free for no less than six weeks, you grovel sufficiently, and post the “support ticket” number that we provided you when we began ignoring you, we MIGHT have pity upon you and gift you with the return of your money.

Allow me to take this opportunity to reiterate something I said earlier:

Oh, and GPalVP? If you happen to read this post…your sig line? Here, I fixed it for you:

34 thoughts on “The Gunpal/Gpal saga continues”