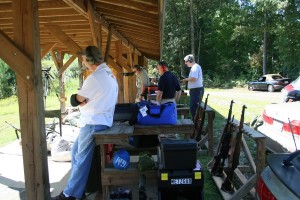 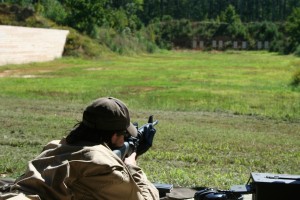 Not to pick nits, but they did allow a couple of ARArmalite Rifle - The official designatio... More style rifle entries, which technically aren’t “as issued military rifles” but it was just a fun match anyway so nobody complained.

I hadn’t been to the range in quite a while.  Considering that I still have half a case or so of .30-06 and the entry fee for club members was only $5, I figured I could spare that and maybe the same amount on gas to participate.

I loaded my M1 Garand (which is too dangerous for us lowly civilians to own, don’t you know…just ask the Brady Campaign…why would anyone want one of those military style rifles anyway?  They’re only good for killing people…or something.  But I digress…as usual) and assorted other shooting paraphernalia onto the bike and hit the range for the first time in a while. 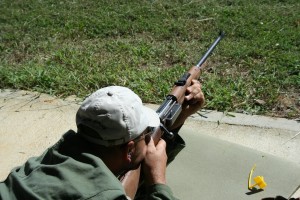 I shot in the third relay.  Another shooter in the second relay was using a Krag carbine.  I’ve seen them at gun shows and places like that, but I’ve never actually seen anyone shooting one…and BOY was he shooting his.  I knew he was going to be a challenge to beat.

I shot pretty well.  I have to admit after shooting my National Match ARArmalite Rifle - The official designatio... More for a while, with it’s two stage, four and a half pound trigger, the Garand felt like trying  pull a truck with my trigger finger.   The Garand really does have a good trigger for a stock service rifle…no creep, crisp letoff, but I’d guess the pull weight is around 7 or 8 pounds.  Might be time for a trigger job.

As an added excuse, I lost my reading glasses right before it was my turn to shoot, so I was having a hard time focusing on the front sight.  Interestingly, I realized that my vision is such that, when prone, My eyes are just enough closer to the sights to make the front too close to focus on…but when standing off-hand, it’s a couple of inches farther from my eye, which was enough to make it come clearly into focus when shooting from that position.  I was actually very pleased with my off-hand shooting for the first time in a long time.

Anyway, overall, I was pretty pleased with my shooting…could have been better, but didn’t suck…and after talking to Mr. Krag (also known as Chuck) while scoring my targets, he told me that we had tied on score but that I had beat him in Xs.

The official results were posted today and he was right…except they didn’t post the Xs in the results.  I don’t know why.

So I suppose officially we tied with scores of 261, but I know that he told me he only got 2 Xs to my 3, so I’m declaring myself the unofficial winner.