I think that’s the least progressive score I’ve seen yet.

There were a couple of really iffy questions.  For example: 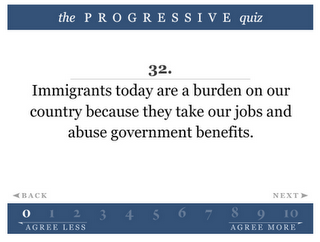 Hmm.  The problem I have with this question is that the left loves to mischaracterize the conservative position in this way, but it’s simply not true.

They DO abuse government benefits because they contribute very little to the society or economy and nothing that wouldn’t be contributed by legal residents were they not here (Illegally).  In many states they are granted government services “no questions asked”.   They don’t pay their fair share of taxes because they often are paid in cash.  They don’t have health insurance so they go to the emergency rooms where they can’t be turned away.  They don’t have auto insurance or driver’s licenses, so when they’re involved in an accident, they can’t pay for it…if they don’t just flee the scene.  Etc. Etc. Etc.

I’m sure the properly “progressive” answer is to score this question a zero…which is also the correct properly conservative answer taking the question literally;  but because I read into the question a bit and I interpreted it with an “Illegal” at the beginning, I scored it a 10.

Basically, I believe this one question may be why I scored so much lower than everyone else, because I’m sure most conservatives answered it literally and scored it at or near the bottom of the “agree” scale, which, of course, the progressives will interpret as indicating agreement with their support for ILLEGAL immigration.

Another one I thought was a loaded question: 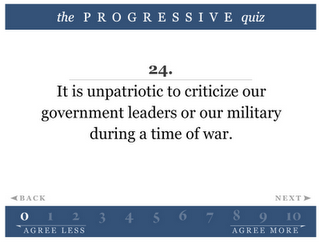 The progressive answer to this question depends completely on what party is in power at the time.  If the Republicans are in charge, the answer would be “0”.  With Obama and the Dems in charge of two of three branches of government, I’m sure they consider the correct answer to be “10”.

Is it unpatriotic to protest outside the Marine Corps recruiting office or to prevent recruiters from visiting campuses, accusing them of being murderers and war criminals?

Is it unpatriotic to call the General who, through his leadership, and vision, orchestrated a dramatic turnaround in the war, significantly reduced the casualty rates, and helped to insure eventual victory “General Betray-us?”

You bet your sweet bippy it is.

So, how do you honestly answer that question?  It doesn’t go nearly far enough.

Anyway, there were some other questionable items but those were the most egregious.  This poll is, of course, being presented by the inaptly named “Center for American Progress” so I’m sure they’ll find some way to use the results for propaganda purposes…but it was interesting if nothing else.

Besides, if enough of us “conservative” gunnies take the quiz, we’ll drive their average down…assuming, of course, that they’re even being honest about what the average American’s score really is.