Lissa recently recounted her harrowing experience and the epic battle that ensued when her home was invaded by a dangerous predator.

Lissa hit mine right on the head.

The only thing in the world that I have an irrational fear of is spiders.  There are objects and critters for which I have a healthy respect due to their potential hazards.  There are situations that can cause me to feel abject fear.  But those are rational reactions to real or perceived threats.

My fear of spiders is admittedly completely irrational and not based on any legitimate or even perceived danger.

Knowing that doesn’t keep me from being afraid of the stupid things.

I don’t allow my fears to prevent me from living life.  I swallow my fear and do what I have to do.  It isn’t easy, but I do it.

That is not to say that I live in peace and harmony with the object of my fear.  During “spider season” (typically the early fall in this area), I regularly go on safari around the outside of my house, I unashamedly engage in chemical warfare, utilizing a pump sprayer of anti-arachnid nerve agent and pumped up enough to avoid CQB by employing it in the manner of artillery or air strikes. (“Bravo six, this is Alpha actual, left 5, drop 20 and fire for effect.”   “Roger Alpha…outgoing, stand by”).

Obviously, this technique doesn’t work well for room clearing in urban warfare and so I do have to have a CQB option.

In comments to Lissa’s post above, Dr. Feelgood asks “What caliberThe bullet or Bore diameter of the gun -... More [for spiders]?” and recommends 6mm airsoft. 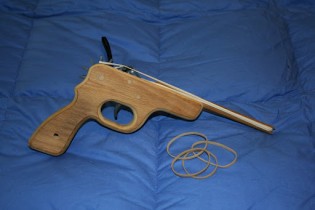 Here’s what I employ against the vile beasts in an in-home, Close Quarters setting.

Doesn’t have much in the way of sights, but you can just aim down the top of the barrel for pretty good results.

Decent trigger, though a bit creepy.  Pretty accurate up to about 10 feet or so.  With the right ammo, it has plenty of power for your average 8 legged adversary.

Ammo is cheap and plentiful and, as far as I know, the Brady Campaign isn’t even trying to get these banned yet.

Someday, perhaps, I’ll overcome this irrational fear.  Until that day, though, my anti-arachnid arsenal is never far from reach.