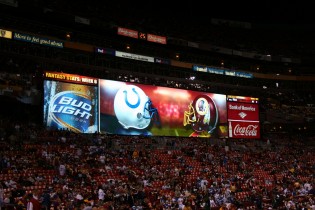 How I spent my evening last night.

My son’s wife bought him tickets to the Colts/Redskins game as a graduation gift last spring.  I don’t know how much she paid for them, but they obviously weren’t cheap because they were pretty awesome seats.

We were on the ten yard line on the visitor’s side (we are, of course, Colts fans, so this was fitting) about 14 rows from the sideline. 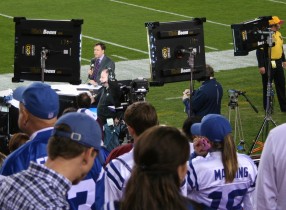 This picture was from our seats. We actually went down to the bottom of the section and got better pictures of him, but I wanted to show the view we had from our seats. 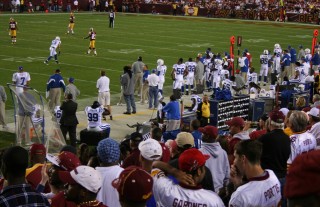 The Colts sideline from our seats. 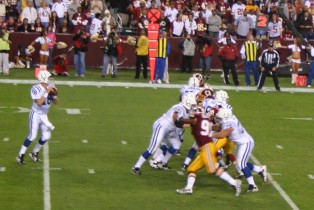 The pictures came out OK, but not great. It wasn’t quite bright enough in there to have the shutter speeds fast enough to really catch the action clearly so body parts in motion at the time the picture was snapped may appear a bit blurry. 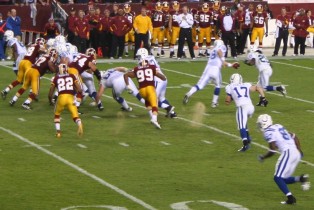 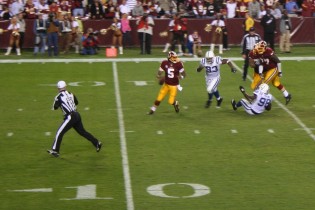 McNabb, two steps from getting his clock cleaned by Dwight Freeney. 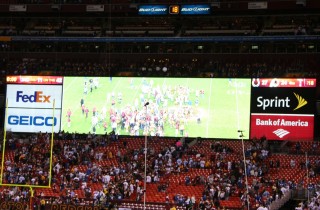 The Colts tried very hard to give it away at the end, but the defense pulled through and squeaked out the “W”. 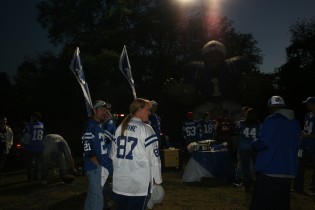 I was actually very surprised how many Colts fans there were. We ran into this crew tailgating in the parking lot on the way in.

This guy is what actually drew our attention to them. You can see him in the background of the above picture but he’s kind of dark because of the back lighting. Apparently, he made the trip from Indianapolis with some hard core fans. 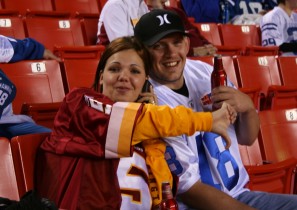 This interesting couple was seated right next to us. For some reason, he seemed to enjoy the game much more than she did…I wonder how his evening went after the game?

We had a great time, got a chance for some rare Father/Son bonding, and got to celebrate a Colts victory…what a great way to spend a Sunday evening.

My son drove. He and his wife recently bought a brand new car, complete with all the newfangled dodads and thingamajigs like a feature on the instrument panel that gives a realtime readout of average fuel economy.

We were sitting in traffic trying to get out of the parking lot, just idling and not moving when he mentioned that his fuel economy was going down pretty quickly.

“Well…that makes sense”, says I; “We not moving but we’re burning gas, so realistically, we’re getting zero miles per gallon at the moment.

Sure enough, after sitting there long enough, the average fuel economy took a pretty significant hit. 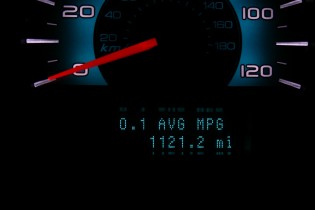 I don’t care how efficient you’re engine is, when you’re not moving, you’re fuel economy is going to suck.

It only took us about 45 minutes to get out of the parking area so it wasn’t too awful bad…but I can’t imagine having to deal with that more than once a year or so.

After the drive back from DC (I-95 traffic isn’t too bad in the middle of the night) we ended up back home at about 4am. And, of course, I had to be at work at 7:30 this morning so I’m a bit punchy right now.

Oh well…it was worth it.

5 thoughts on “Are you ready for some football?”