I’ve been spending pretty much every second of my spare time filling out job apps and sending out resumes.  Went to job fairs on Saturday and Wednesday last week.

Found some jobs that have sounded like I’d be a good fit for, but apparently the employers haven’t agreed.

Less than a month and I’ll be indigent.

I’m sure you’re all aware of the big storm that shot up the East Coast last week.  Thursday when the wind and rain were at their worst, water started coming in around the downstairs bathroom window frame.  I put a towel up to absorb and direct the water flow into a bucket.  We collected probably two gallons or so of water over the course of the storm. 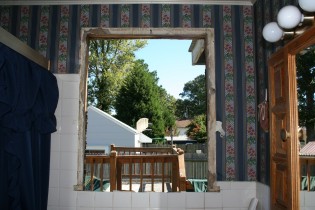 Yesterday was a nice day so I started digging to figure out what was going on.  I almost wish I’d just lived with the leak.

We get nice air flow into the bathroom now. 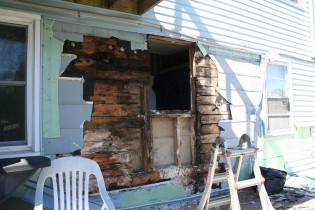 It is a mess.  It’s been leaking from the corner of the balcony above and the tops of the window frame for quite some time.

Luckily, the rot doesn’t get all the way down into the floor boards or sill plate, it pretty much stops at the bottom of the wall.

I got all the bad sheathing boards cut out, and started cutting out and replacing studs yesterday.  I was planning on getting back to it early this morning…but the best laid plans… 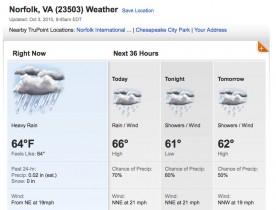 Isn’t piling on a 15 yard penalty?

So, versus working on repairing damage, I’ve spent all morning working to prevent more.

It’s supposed to get windy later on, which means all the plastic I put up will probably blow away.

As my Dad used to say:  No where on your birth certificate is there any guarantee that life is going to be easy.

And, of course, it could be worse.  At least I still have a house to have problems with.

Remember that part above where I said the rot hadn’t gotten to the sill or joists yet?  I was wrong.

I keep peeling back more siding and finding more rot.  I think I finally reached the edges of it today.  So, I’ve got to finish replacing the rotted studs and sheathing, figure out where all the water is coming from (most of it I’ve gotten tracked down, but a couple of spots, I’m not sure about) and fix the leaks.  Rebuild the rotted window frame and install the replacement window when it finally comes in (should be the end of next week).

THEN, I get to climb under the house, jack the joists up, knock out the rotted rim joist and sill and replace them.

THEN, I can replace the siding and finish restoring water tight integrity.

In my spare time.

I might have this finished by this time next year.  If we’re not living under a bridge by then.