Updated with some photos.

I’m sitting in the Church sound booth.  The worship team just finished practicing so I’m just waiting for the service to start and had a few minutes to kill.  I’ve got some pictures to post but I’ll have to do it later from home if I have time.

First, on the job front:

As regular readers (the ones who haven’t written me off due to lack of posting lately) know, my current position is being eliminated as of November 1.

I had an interview the Thursday before last for another position within my company.  The manager of that project seems very positive that I’m going to be offered the position, but I haven’t gotten a formal offer yet.  I’m hoping I’ll get something early this week.

The down side is that the job is in Northern Virginia.  It really sounds like something I’ll enjoy, but until I can get the house ready and either sell it or rent it out, I’ll have to find a room to rent or efficiency apartment up north and come down south on the weekends for the duration.

Not the best situation to be in, but better than living under a bridge somewhere.

Next, on the house repairs: 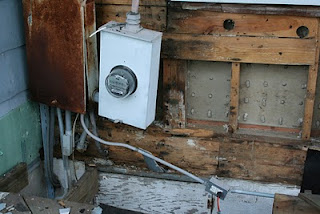 So far, I’ve gotten all the rotten sheathing ripped off, the blow-in insulation bagged up (what a freaking mess), the rotten studs replaced and the walls insulated with fiberglass.  I’m now working on putting the sheathing back up.  I’m almost finished with that.

Next, I’ve got to reflash the balcony and above the windows, seal it all up with tarpaper or house wrap,  rebuild the window frame for the bathroom window and get that window installed, rebuild the rotten trim pieces around the window frames for both windoes, redo the aluminum wrap around that trim.  At that point I will have pretty much restored water tight integrity.

The next major step is to get under the house and jack up the joists, knock the rotten rim joist (sometimes called the header) and the sill out, replace that with new wood and lower the joists back down.  Then I can finish up the sheathing around the bottom, reinstall the siding, reattach the breaker box and meter to the side of the house and caulk the heck out of the whole thing to make sure it’s sealed up tight to prevent a repeat performance in a few years. 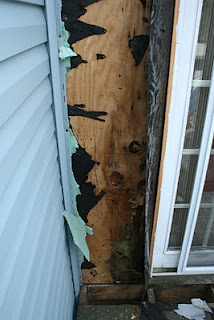 Whew…writing it all out makes it obvious that I’ve still got a lot of work to do, but I’m making definite progress.

Basically, that’s what’s been occupying all my “spare” time lately.  I start working on the house as soon as I get off work and go until it gets too dark to see what I’m doing.  Unfortunately, the days are getting shorter, so I’ve generally only got a couple of hours to work before it gets dark.  By the time I’m done with that, I’m generally too tired and sore to do much more than take a shower, sit in my recliner and moan.

I got a lot done yesterday since I had all day to work on it, but the longer I work the more it hurts.  I try not to let my Navy related disabilities slow me down, but I’ve gotta admit that I just can’t do this type of work like I used to be able to.  It just hurts too much. 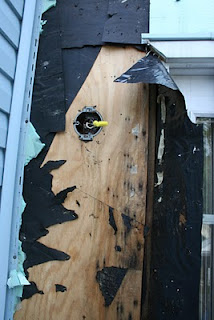 For those of you still hanging around…thanks for your patience.