I’ve been remiss in updating for a while because there’s been a lot going on and I’ve just been pretty much on the run.

The week after Kellen was born, I headed out on a business trip.

Some of you may recognize this skyline.  The white skinny structure to the left gives it away.

Yes, that’s the space needle.  I spent the week in Seattle a couple of weeks ago.

Unfortunately, my time was taken up with business so I didn’t have a chance to get together with any of the fine gun bloggers in the area.  There are a bunch in the Washington State area and it’s a shame I didn’t have time.

Maybe next time…and there will be a next time.

BTW:  for anyone who’s never been there, the above shot was taken from Highway 5 on the way into town.  There’s a place where you come over a hill and around a curve and the skyline just appears before you.  It’s breathtaking the first time you see it.

Of course, the weather for the week was typical Seattle spring:  cloudy, drizzly and dreary.

After I got home from that trip, we got ready for the next one…back to Indiana in a whirlwind 4 day round trip.

Since the crash and the miracle that is my sister’s recovery, she has become all to conscious of the fact that life is too short and precious to let any of it go to waste.  She and her fiance of several years finally decided to tie the knot.  Once the decision was made, they didn’t want to waste any time, so it happened pretty quickly. 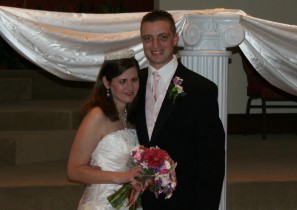 It was a beautiful, small and tasteful ceremony and The Wife and I were thrilled to be able to attend.

I present Mr. and Mrs. Bart and Yolanda Butler.

Her eyes look a little off because she didn’t want the pictures taken with her glasses on…but that means she was essentially blind while they were being taken.

That minor point aside, they make a great looking couple don’t they?

I haven’t seen her that happy in a long time.

I got some pretty good pictures so I’m going to share a couple.  I may put more up on Flikr or something. 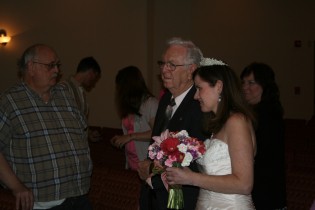 The bride and step-dad Bill 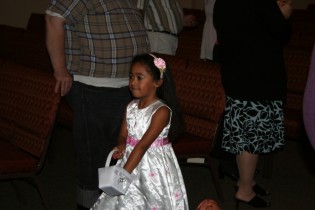 She’s a cutie isn’t she?

She’s smart as a whip and is very affectionate too.  She’s gonna be a heartbreaker. 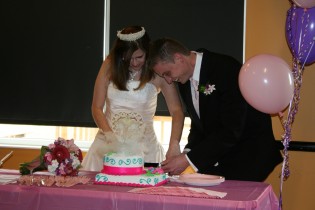 Anyway, it was a great day.

In a couple of weeks, I’m going to be going to Germany on a business trip, during which time The Wife is going to go on a road trip back to Indiana to spend time with the happy couple and also to Wisconsin to see some of her family, so it doesn’t look like it’s going to get any less busy any time soon.