For the past few weeks I’ve been getting ready for the annual family motorcycle trip.  My bike had been running rough and I had to rip the carbs off and rebuild them; of course I lost a part and had to order a replacement…then found the original almost immediately after receiving the replacement;  then I had a couple of other minor issues that I had to take care of…so for about the past month, every evening from the time I’ve gotten home from work to bedtime has pretty much been taken up with something.

So with the excuses out of the way, consider this the first official post of the annual Stone Family Motorcycle Trip.

I’m blogging from my BFF’s house in Indianapolis after riding in a sauna all day yesterday. 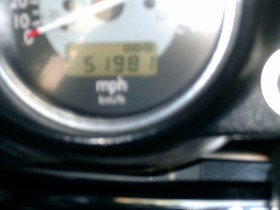 Starting Mileage from the East Coast of Virginia:

Sorry for the fuzzy picture.  Couldn’t get the cheapo camera to focus correctly.  That’s 51981 if you have trouble reading it. 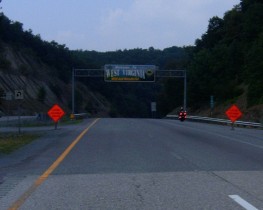 The states I drove through yesterday.

I was thinking that being in the mountains around noon to early afternoon would be nice because it would be cooler in the altitudes there.

No such luck.  Hot as Hades the whole time. 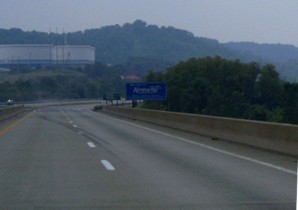 Through West Virginia and into Kentucky.

I actually got rained on in Kentucky.   For about 18 seconds.  Just a sprinkle.  Not enough to cool anything off. 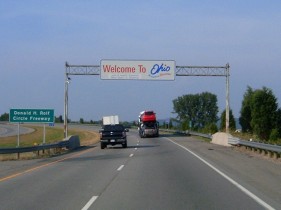 My route takes me around Cincinnati on 275 so I’m in Ohio for about ten minutes or so. 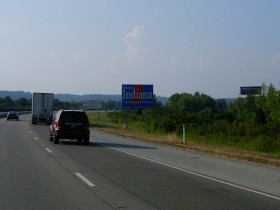 And, Back Home Again in Indiana.

This is actually the first time crossing over into Indiana.

When you take 275 around Cinci, you go from Kentucky to Indiana first.  You’re in Indiana for about 2 or 3 miles, and then into Ohio.

When I was crossing from Ohio to Indiana, it was about 6:30 pm heading west.  The sun was right in my face so the picture came out very dark.  This one was headed north so it is a much better picture.

Anyway, total trip of 720.5 miles by the odometer (which reads a little low…I’ve never seen a motorcyle with an accurate speedometer/odometer.  Don’t know why).  Total time 13 hours and 15 minutes including three gas stops and one hour-long meal stop.

The actual trip starts tomorrow morning at 0500.  We’re heading Northeast this time and ultimately will end up in Bangor Maine.

It might be a couple of days before I have a good internet connection again, so don’t worry if you don’t hear (read) anything from me right away.  I’ll update when I can.

3 thoughts on “Been quiet around here”