Bonus points to anyone who gets the song reference in the title of this post.

I was going to post an update with another video (pretty much the same as the previous ones) before going to bed last night, but the internet connection was down.

The storm wasn’t nearly as bad as the media had us expecting. 100 year storm? I think not.

That’s not to say that it couldn’t have been worse. I got the feeling that it weakened significantly after making landfall in North Carolina, so by the time it got to us, it simply didn’t have the oomph that they were expecting. 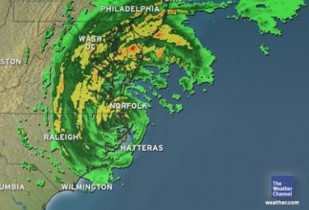 Not nearly as bad as Isabel, which just dealt us a glancing blow. This one went right over the top of us, but just didn’t have the energy to do any serious damage.

The Wife and I went over to her parents house this morning to check on it. They bailed a couple of days ago. Their house is right on one of the small rivers that flow through this area and can flood with a big storm surge, so they button up and leave town when hurricanes approach. 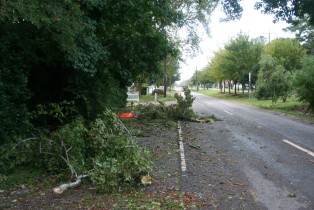 The drive over confirmed my impressions. I’ve seen worse damage from a Nor’Easter.

Lots of limbs down. 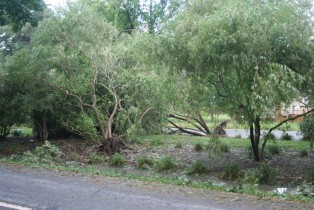 But none of the widespread downing of old growth, big trees. I’m sure we lost some in the area, and The Wife said that an 11 year old kid was killed when a tree fell on their house yesterday. As devastating as that is on an individual level, big picture-wise, this just wasn’t that bad a storm for a hurricane. 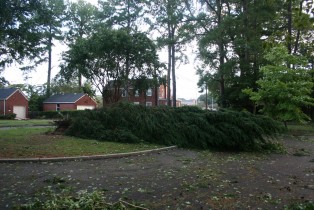 The worst damage we personally saw was in the circle outside The Wife’s parents house. One of the medium sized pines in the circle went down and took the cable and phone lines with it.

They currently have no power and the surge had delivered about three inches of water into their garage, but was receded by the time we got there and the house proper was fine.

They’re used to that and all the important stuff was already up off the floor, so no real damage to speak of. 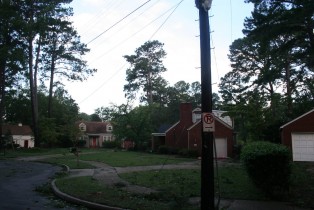 We saw several places where cable and phone lines were down, but no downed power lines.

There are obviously some areas with no power, but it doesn’t seem to be as widespread as with Isabel…which makes sense considering the sheer number of big trees that Isabel brought down.

Overall, we got off light and, unless it picks up a lot of steam again before hitting New England, they should be fine.

Oh…one casualty: My truck isn’t running right. There seems to be a cylinder not firing all the time. I looked and there is a bit of water in there on the block so it may run better after it dries out. If not, I’ll have to figure that one out.

Update: I decided to go ahead and upload the last video I took last night. This was at about 6:30pm and during the worst part of the storm. I caught the very tail end of a really big gust of wind at the beginning of the video, but after that died down, as you can tell, sustained winds just weren’t that bad. Some of the gusts were pretty intense, but not many, and not as strong as I was expecting.

All in all, much ado about very little.