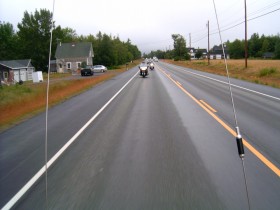 After a night back at the hotel in Bangor, we headed back to Bar Harbor on Saturday to do some souvenir shopping.

The day started out looking a little ugly, but quickly cleared off and became a very nice day. 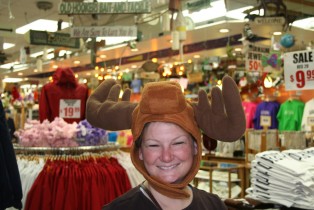 We found some interesting artifacts including the moose antlers being modeled here by the Sister-In-Law. I picked up some toy lobster magnets for the grandkids, and got a good deal on a pair of hats and a pair of T-shirts for myself and The Wife.

We ate lunch at a really interesting place, the Bar Harbor Route 66 Restaurant, where I partook of Clam Chowder and a Lobster Roll. 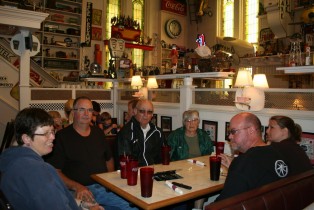 The inside of the place was as interesting as the outside. The original restaurant burned in the mid-80’s; when it was rebuilt, some of the features of an old church that was being demolished were incorporated. The stained glass windows and fancy bannisters and railings provide a unique look.

Toss in a lot of ’50s and ’60s antiques and you get a pretty memorable atmosphere.

And the food was excellent too.

After lunch, we hit Ben and Bill’s Chocolate Emporium for Ice Cream. I just had to try the Lobster Ice Cream, if for no other reason just to say I’d tried it.

I have to admit that it was…um…different. Probably not a flavor I’d go out of my way to get in the future, but definitely worth trying once. 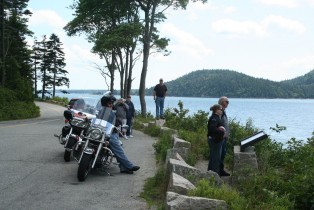 After lunch, we hit the road again and did an even bigger loop around the perimeter of the entire Mount Desert Island.

Lots more great views and interesting roads and even included a stop at an operating Light House. 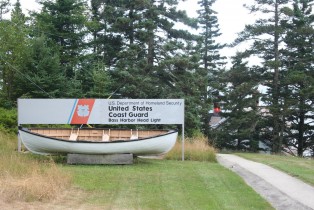 We made kind of an early day of it so we could get plenty of rest for the final leg of our journey the next day.