As I said earlier, I spent last week in Salt Lake City for business. I was pretty busy the whole time and didn’t have time for sight seeing, but I did take a couple of pictures.

I’d never been to Salt Lake City before so I didn’t really know what to expect. Flying in was interesting. The pilot said we were 20 minutes from landing and all you could see out the window was mountains, mountains, mountains…then all the sudden, the mountains receded and there it was. 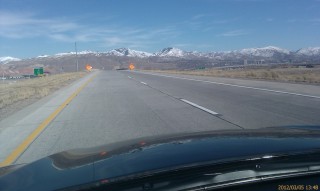 Salt Lake City is pretty much nestled in a big bowl, surrounded by mountains.

Pretty scenery, but can you imagine how difficult it was to get here back in the days of Conestoga wagons and oxen? That kind of thing amazes me. We take our modern conveniences so for granted, but I often think back to how it must have been when the land was raw and rough, there weren’t rest stops with running water and soda machines every 30 miles and the average speed of overland travel was maybe a couple miles an hour. 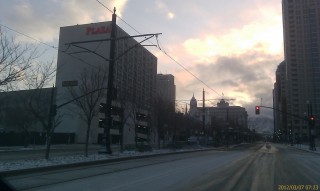 At any rate, the weather was very nice most of the time I was there. I was surprised at how warm it was when I first got there on Monday afternoon, but it cooled off that evening and even snowed a little during the night.

This is a dual purpose photo…it shows the dusting of snow we had on Tuesday morning, and also shows the hotel that I stayed in…the Salt Lake Plaza.

And finally, the view from the hotel. My room was on the Tenth Floor. Hey, it’s Mitt Romney’s Church.

And yes, I stitched two pictures together to make this panorama shot of Temple Square.

My next trip is either going to be to Denver or Portland. Not sure which yet. Will be soon though.