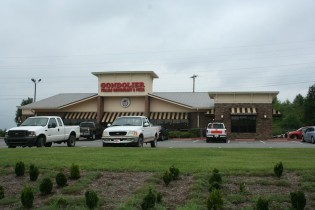 The second review I wanted to post was of a restaurant we ate at in Harrogate TN, just south of Cumberland Gap.

It’s a franchise chain called Gondolier that apparently has locations throughout TN, GA, and FL. I can’t speak to the other locations of the chain, but the one in Harrogate was exceptional.

I ordered the only steak they had on the menu and it was listed as a special. It was billed as a Filet Mignon but was not the typical round, bacon wrapped cut, but a large, 9 oz portion. I have to admit that I was a little leery of ordering a steak from a place that bills itself as Italian food and pizza but that’s what I was in the mood for so I took the chance. Boy was I glad I did.

The steak was as close to perfection as I’ve had in a LONG time, including the pricier restaurants I’ve patronized in my travels. It was seasoned perfectly, cooked perfectly and melt-in-your-mouth tender. Absolutely a stunning piece of meat.

I also got a baked potato that was excellent. Typically a baked potato from a restaurant has been sitting in a warmer for hours, the skin is dried out and inedible and the “meat” of the potato is cooked into mushy submission. This potato was also as close to perfect as it comes. Freshly baked, still moist even to the skin, and adequately cooked but still firm.

Everyone else was pleased with their meals as well, but the steak meal (which I don’t see on their corporate menu, by the way) was amazing.

I must also point out that I am a very good cook myself and am often disappointed in restaurant fare because I could have done a better job of the meal at home myself and less expensively. Not in this case. I think that steak was better than anything I’ve ever cooked myself and even the potato I couldn’t have done better at home.

To top it off, The Wife ordered a “slice” of Coconut cake for dessert. It was huge. I can’t imagine the size of the cake that this slice was taken from but it must have been monstrous. The piece of cake made it all around the table (6 of us…5 that will actually eat coconut) and there was still some left that the group just couldn’t finish off.

As far as the other important things about restaurants, It’s not a “fancy” restaurant but the location we were at was fairly new and/or very well kept. The prices were very reasonable…I believe I paid about $18 for my Filet Mignon dinner. The place was very clean, we were seated immediately, the service was prompt, professional and personable and the atmosphere was perfect for a family restaurant…not too dark, but the lighting wasn’t harsh, and quiet enough that we could easily carry on a conversation at our table.