I hesitate to post about this because to do so I have to accept my part of the responsibility for what happened. I do need to talk about it a little though so I’m going to. Obviously, it’s hard to be objective about one’s own failings, but I’ll try to be as honest and up-front about what happened as I can be, considering my perspective.

I’ve often joked about cage drivers “trying to kill me” while I’m out riding. I’ve never really meant it literally…only that they were figuratively trying to kill me by driving like idiots and/or not paying attention to what’s going on around them.

This morning, however, for the first time, I had someone literally attempt to commit vehicular homicide on me. 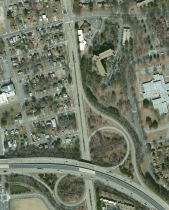 I was traveling south toward the interstate on a large, three lane road.

I went through the light at the top of this picture in the middle lane. I needed to get to the ramp onto the highway, but traffic was bumper to bumper and no one was wanting to let anyone in.

Here’s the first thing I did that contributed to the situation. I found a spot in the traffic that my bike would fit into. It was barely big enough, but it was big enough. I matched my speed to the traffic, turned on my turn signal, and moved over. I was probably only about a foot or so ahead of the bumper of the light blue mini-van I cut off. In my defense, they were being jerks by not letting anyone in and when I got over, I was going the same speed as the rest of the traffic, so I didn’t cause anyone to have to slow down.

But the honest truth is that I cut them off. 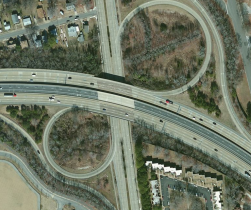 What happened next, though, was ridiculous. I reached the exit loop to get onto the highway and started around it. I tend to take curves tight so I was toward the right side of the curve, but well to the left of the line delineating the travel lane.

So, I’m in the bottom loop of this picture, at about the southernmost point of the loop, when I notice the light blue minivan BESIDE ME, to my left, half in the lane and half on the shoulder.

Understandably (at least to me), I didn’t really want a mini-van sharing my lane with me so I reacted. This is my second contribution to the incident: I slowly edged toward him, to try to get him to back off.

I got closer and closer and he edged to his left, but there’s a guard rail there so he could only go so far. I expected him to get nervous about the guardrail and back off.

Nope. In stead of backing off and getting to where he should have been, he swerved toward me and sideswiped me.

It was more of a bump than anything else and, of course, his 3,000 lb mini fan had no problem pushing my 900 lb bike over a little.

I was never in danger of losing control, and it happened too fast for it to really scare me…but boy did it piss me off.

I think the look on my face told him he’d gone just a bit too far and he immediately backed off.

When we got onto the interstate, I worried about getting into the traffic safely first so by the time I got onto the highway and looked for him, he was WAY back behind me. So far that I couldn’t pick him out in the traffic in my mirrors. Apparently he’d wanted some separation and had entered the highway very slowly.

I drove for a minute or two and then decided that I wanted to at least get the guys license plates…I couldn’t exactly force him to pull over from my bike, but if he decided to pull over for a “discussion” about what happened, I’d be VERY happy to oblige him.

With that in mind, I signaled, and pulled off onto the shoulder. It was a good 15 seconds before he passed, but I saw him go by, signaled again and accelerated back into traffic.

Coming from a dead stop like that, I had to get into the center lane to catch back up with him. He obviously saw me coming and did what every brave cager who tries to use his vehicle as a weapon of revenge against someone who cuts him off: he suddenly and very frantically decided he needed to take the exit he was passing.

I was still in the center lane and didn’t have time to safely follow him into the exit, so I just let him go.

I needed to get to work anyway. Not a good idea to chase someone down when you’re pissed enough to stomp a mud-hole in them anyway. I’m not real fond of the idea of going to jail for assaulting someone, no matter how badly they needed it.

Granted, I contributed to the situation by my actions, but that guy flat out could have killed me. If I’d been less experienced, or on a smaller bike, I could have easily lost control when he bumped me, and been run over by the trailing traffic. I don’t think assault with a deadly weapon is a suitable response to being cut off in traffic, do you?

I’m not really looking for any reassurances or critiques from my readers, I know full well what I did wrong and I know full well that, had the guy pulled over and any type of altercation ensued, I’d have had to have accepted my part of the blame. I’m mainly looking to just vent about it.

I simply have a difficult time believing that any rational human being would INTENTIONALLY endanger someone else’s very life over something so trivial as being cut off in traffic.

I will be looking out for this guy. He’s a coward who feels empowered when behind the wheel of a 3000 lb lethal weapon and that’s a dangerous combination. Hopefully, I’ll never see him again…and if I do, he’ll be willing to just ignore me as I will him. But if we do happen across each other again and he chooses to get froggy, I’ll be ready and he won’t be happy with the outcome.

BTW: in case anyone is wondering…both me and my bike are fine. He did hit my left highway peg hard enough to move it, so hopefully he at least got a nice dent for his stupidity, but my bike (and body) is well protected by engine/saddlebag guards so I had no damage or harm at all.