A while back, it included a reminder that he’s unable to work and has no source of income as a result of this case, and that he’s had to live in hiding because of the death threats he’s received. Basically as the case has moved to the back pages of the newspapers, it’s receded from the public’s consciousness and the donations to his legal defense fund have declined, making it difficult for he and his family to pay the bills as well as keep their legal defense going.

I think George Zimmerman has been railroaded. I think his charges are purely racially motivated and based on a false narrative ginned up by the greedy, race hustling lawyer that Trayvon Martin’s family got in bed with, and the negligent sensationalizing of the story by a media desperate for ratings at any cost.

Because I believe these things, I put my money where my heart is and donated what I could to his cause. 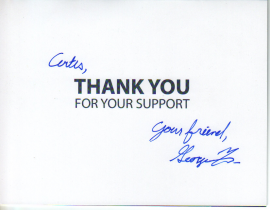 Yesterday, I received a personalized, hand-signed thank you card in the mail.

I don’t want to overstate the importance of it…it’s pretty minor in the grand scheme of things…and I don’t know if it’s only people who donate over a certain amount that he personally responds to, or everyone that donates, but considering the number of donations he’s had to have received, I just think it demonstrates class and humility and I really appreciate it.

It’s the first time I’ve ever received a thank you card for donating to an individual over the internet. Thanks George, if you read this, I’m honored to have you call me your friend.

If you’d like to be a friend of George too, his ordeal is long from over and I’m sure he can still use all the support he can get. Be sure to check in regularly with his legal defense web site and, if you can spare a shekel or two, donate to his legal defense fund.

2 thoughts on “I am George Zimmerman’s Friend”