I know I haven’t posted much lately. Just seems like there are so many good bloggers out there who say the same things I would, but much better.

Plus I’ve been traveling and just very busy, so…

But this morning, I ran across this AP opinion piece (masquerading as a story) which makes the claim:

In California, most guns come from Nevada, where there is almost no regulation of firearms, Cutilletta said, and in Arizona, gun owners don’t need a permit.

The story isn’t exactly clear on exactly what they mean by “most guns come from…” so I have to make an assumption here*.

I doubt that they’re talking about LEGAL guns because Californians can’t legally purchase handguns in Nevada by federal law and I’d imagine that state laws preclude them from purchasing rifles across state lines as well (especially since California has a ban on scary looking cosmetic features on rifles).

So I imagine that they’re talking about illegal guns or guns used in crime. That means they must be relying on trace data for this information (which, by the way, the ATF expressly cautions is NOT a proper use of their trace data). This would be VERY surprising to me if true, because most ATF trace data reveals that the vast majority of traced guns originated in the very state they were recovered in.

Let’s find out, shall we? From the 2011 ATF Trace data report on California: 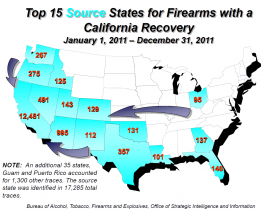 Hmmm. Not only is California itself the source of the vast majority of the guns traced in California, but Nevada isn’t even the source of most of the out of state traces; Arizona is.

So, as I expected, the AP, and the gun control community (sorry for the redundancy) are talking out their butts.

Someone explain to me again why we are supposed to listen to these people about setting policy when they can’t even get their basic facts straight?

*I attempted to contact the organization that made the claim (Law Center to Prevent Gun Violence…formerly Legal Community Against Violence**) but my e-mail was returned as undeliverable. Their web site is still up, so I don’t think they’ve gone defunct, but the e-mail address is dead.

**Why do these groups change their names so often? Do they think it’s their NAME that’s preventing them from getting the support of the general population? In this particular case I have to laud them for the change, they actually changed their name to be MORE descriptive of their agenda rather than less, as is normally the case. They aren’t REALLY against “violence”, they’re against guns, so their new name actually is more descriptive of their goal. Kudos to them for that, even if they do try to mask their agenda in terms of “gun violence” rather than just saying “Law Center Against Guns”.