So, now that we’ve figured out what types of parts we need, the next step is to figure out exactly what to order.

The goal was to make a custom rifle, as accurate as possible…preferably sub-moa, but also keep it under $800 all-in. A lofty goal.

I had an idea of what I wanted, but I didn’t want to rush because I was planning on getting things as I found sales and deals. The best laid plans…

The first thing I found was a 20″ Socom profile barrel made by ELD for $105. I didn’t know anything about ELD but I looked up some reviews and didn’t find anything bad. They guarantee sub-MOA performance with match ammo so I took the chance. For that price, I figured even if I have to buy a new barrel in a year or so, at least it would get me started.

I bought it from Omega Manufacturing. I did find some bad reviews about Omega manufacturing and apparently it’s owned by a parent company that also runs a couple of other online gun parts retailers. Basically, the reviews weren’t about the parts they sell, but about their customer service…so again, not a show stopper as I was more concerned about getting quality parts than excellent service. Turns out, they actually were pretty good. Got my parts out quickly and resolved the one issue I had.

While I was there ordering the barrel, I looked around at what else they had. They actually had really good prices on quite a few parts, so I ordered several things from them in addition to the barrel:

I ordered a cheap low profile gas block for $6 from Cheaper Than Dirt; I ordered some other stuff at the same time, so call it $1 for shipping.

OK…so I pretty much had everything for the upper on order in one fell swoop…so much for taking my time and buying stuff as I found it…but I still needed the lower parts. I really wanted a Luth-AR MBA-1 stock because of how adjustable they are, but they aren’t cheap. Usually around $160. I finally found one at Schuyler Arms for $120 + $7 shipping and as a bonus, it came with the LR-308 buffer kit and a DPMS LR-308 Lower Parts Kit minus the fire control group.

So the final piece was a fire control group from a cheap $29 LPK I already had. 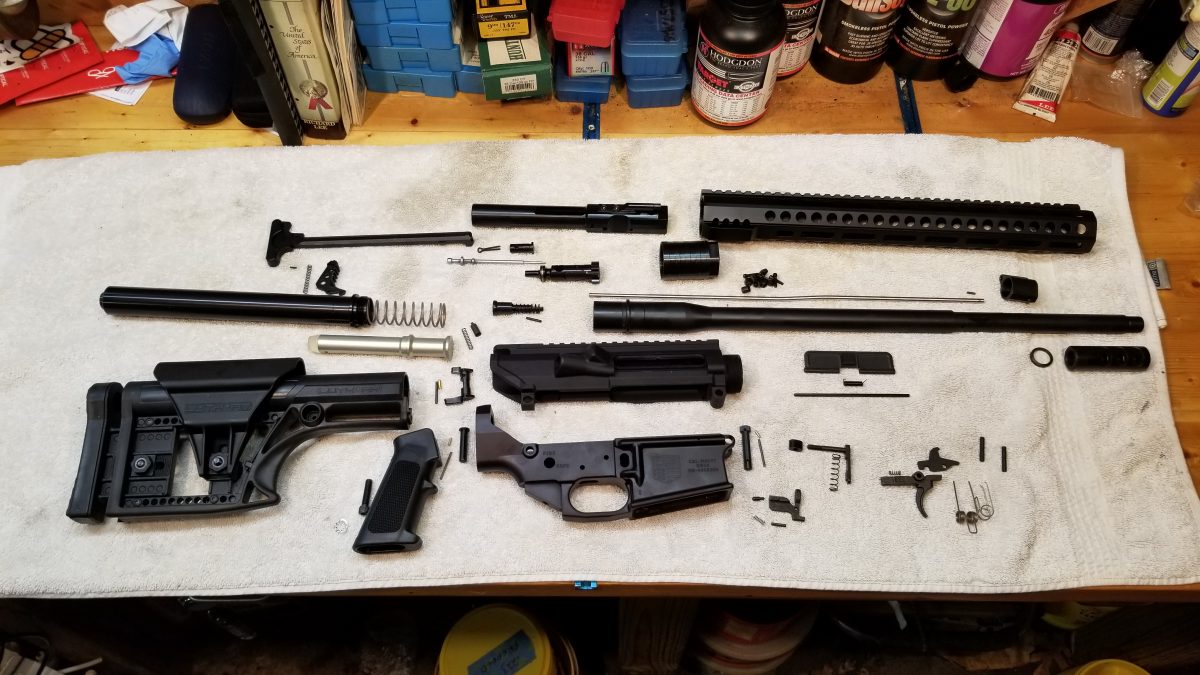 So, that’s where we are: One AR-308…some assembly required (click to make bigger).

Note: There is a vital component missing from this picture. 100,000 internet points to anyone who can figure out what it is. (hint: It’s a fairly small part, but it’s not a spring or pin or anything like that),