I know there are only a couple of people still sticking with my blog since I hardly ever post any more, but I had to share something that I’m just amazed by.

Longtime readers may remember many years ago when I blogged about assembling a national match ARArmalite Rifle - The official designatio... More for service rifle matches. Well, our house got robbed while on vacation a few years ago, that rifle was one that was stolen. I’ve never gotten it back.

I recently decided to replace it, but the CMP and NRA service rifle rules have changed…because the rifles being used in service have changed. No more the bare-bones A2 style carry-handle rifles with open sights. Now you can use free-floated railed handguards, flattop uppers, collapsible stocks and even optics up to 4.5x. 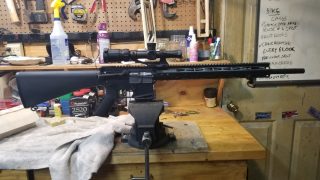 I started ordering parts and got it put together last week.

(Note: As pictured, the scope mount is on “backward” to try to get it positioned better. I eventually opted to turn it back around so it looks slightly different now)

I was a little worried about the barrel. It was listed as a “contractor over-run” with no brand name and on sale for a ridiculous price. It only had one review but it was a 5 star glowing review. The price was just too good to pass up so I took the chance, understanding that I might be buying a paperweight and may have to spend more money on a new barrel if this one turned out to be a bust. It’s a 20″, HBAR profile, rifle length gas system, 1 in 7″ twist, unthreaded with a target crown. The only thing I would have wanted different is that it has a 5.56 Nato chamber and I would have preferred a Wylde, but otherwise, exactly what I’m looking for in a match barrel.

I lapped the upper receiver face to make sure the barrel sits square, was extra careful to get the gas tube perfectly aligned. The only real “issue” I had is that by the rules, the front sling swivel has to be between 13 and 13.5 inches forward of the font of the magwell. This placed it exactly below the gas block. There wasn’t enough space between the bottom of the gas block and the handguard to install the M-lok fasteners for the magpul M-lok GI style sling swivel I wanted to use. I ended up getting one of these which mounts slightly behind the gas block but extends forward enough to be in the right spot. Of course, the actual QD sling swivel that came with it is too narrow for a leather National Match sling, so I also had to order an oversized QD sling swivel. Hopefully that will work out. if it doesn’t, I’ll buy an M-lok picatinny rail section to mount there and put a rail mounted sling swivel on.

So, all told including optic, scope mount and Turner NM sling, I ended up coming in at just under $1k.

I was very meticulous when assembling the rifle and was certain my build was good, but as I said I was a little uncertain about the no-name barrel so it was with no little trepidation that I took it to the range yesterday after work to get started on the break-in.

The first hint was that, at 25 yards, firing individual shots and cleaning the barrel between each shot, the last 7 shots or so just made one ragged hole.

The next stage of break-in is three shot groups, cleaning between groups. I switched to 100 yards because I wanted to see if the group with single shots at 25 was a fluke. I only got three groups in before it started getting dark and I had to pack it up, but boy were they some groups. I was also testing the 1/4 moa scope adjustments which placed the three groups far enough from each other to keep them separate.

That was at 100 yards with the rifle just resting on my range bag…not even a real rest and because the bag is too tall, I didn’t have my butt on the seat of the shooting bench.

Holy crap. I’m thinking if I was shooting from a solid rest, I’ve got a 1/2 moa rifle here. That’s better than my old match rifle that had a more expensive, brand name barrel on it.

I’ve still got four more three shot groups to send before break-in is complete, so it may get even more accurate…but I may never know it; I seriously doubt that I’m capable of better than 1/2 moa with any rifle, but I’ll let you know.

Of course every benefit has an associated cost. If the accuracy of this rifle holds up, I’ll have no excuse if I don’t do well in matches.

Oh by the way…this was with hand-loaded 75gr Hornady Match HPBT bullets over 24 grains of Accurate 2520 that chrono at 2650fps. I haven’t even had a chance to “tune” my loads to the rifle, but I honestly doubt that I’ll be able to do better than that. This may already be the sweet spot for this rifle.

3 thoughts on “Better than I ever hoped”